Woman whose Fiancé was Killed by Israel Released by Israeli Authorities 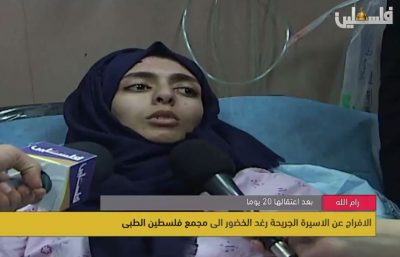 A 19-year old Palestinian woman was released from custody Saturday after spending two weeks in Israeli prison. Raghad al-Khdour, 19, was seriously wounded on September 16, 2016, and her fiancé Fares al-Khdour was killed by Israeli soldiers.

The couple was driving near Bani Neim, north of the southern West Bank city of Hebron when the Israeli soldiers opened fire, killing him and seriously wounding her.

Al-Khdour stated that she and her fiancé were completely surprised when the soldiers started firing at their car.

Later, the Israeli military claimed that the couple attempted to ram soldiers with their car.

Al-Khdour, who was moved to the Palestine Medical Complex in Ramallah, said she was with her fiancé, Firas Mousa al-Birawi Khdour, 18, who was driving the car, when suddenly, the soldiers started firing at them.

She said that all she remembers is the shots fired by the soldiers, and later, being moved to an Israeli hospital.

Raghad was shot close to her spine, and apparently suffered nerve damage, but the specialists need to conduct various tests to see
what the long-term damage will be. It is clear, however, that she will need an extended period of care, recovery and rehabilitation.

Dr. Ahmad Al-Beetawi, told the Palestinian TV that the bullets struck close to the spinal cord, causing more damage to the right side, but the impact to the spinal canal seems to be impacting her right side more than the left. He added that the young woman was also shot in her abdomen. 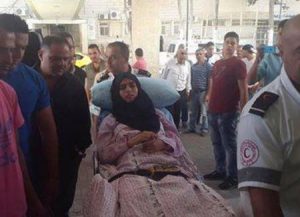