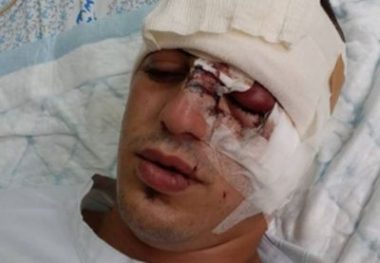 A young Palestinian man from occupied East Jerusalem remains in Intensive Care Unit at the al-Makassed hospital, in Jerusalem, after suffering a serious injury, Wednesday, when Israeli soldiers shot him with a concussion grenade in the face.

The young man, Mohammad Hussein Khweiss, 20, was on his way to Al-Makassed for a checkup as he was suffering from back pain, but while heading there, the soldiers invaded a school in the at-Tour town, in Jerusalem, to kidnap a student, and fired concussion grenades.

Khweiss was shot in the head and face as he was passing by the school when the soldiers fired another concussion grenade at him while they were withdrawing from the school.

After being shot, the Palestinian instantly lost consciousness, before Palestinian medics rushed him to al-Makassed.

One of the doctors who are treating the wounding Palestinian said Khweiss suffered fractures in the lower part of his skull and in his forehead, in addition to cuts and bleeding from one of his ears, and several broken teeth.