A moment that changed my life 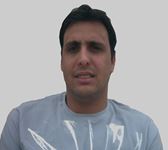 On April 22, 1991, I was only 18 years old; I was out with some of my comrades planning to conduct a march and rally in the streets of our town, Beit Sahour, against the Israeli occupation of our land. This march was one of many peaceful protests held as part of what had become known as the 'first Intifada' (popular uprising), which had begun in 1987.That particular day seemed somehow strange to me, and different from previous marches – usually the Israeli army filled the streets of our town during protests, occupying every corner, but on this day the army remained in their camp, and did not show any presence.

Something felt wrong. Deep inside of me I felt that there was something that did not feel right. Where was the army? What I did not realize was that the army was in fact already present, but in a different shape and form.

On that particular day, it was "the death squads" (as they were known to us), known in Israel as the Dovadim, the Israeli special forces, who were policing and patrolling our demonstration. These are forces which are specially trained for assassinations and are well known for their brutality and their 'shoot to kill' orders.

Apparently, after the Israeli prisons were filled with Palestinians, and after the Israeli policies of 'bone breaking' and long imprisonment failed to stop the uprising, the army decided on a new policy, a policy of 'assassinating' the youth, or at least severely injuring and disabling them.

During the first Intifada, an Israeli high official was quoted as saying that the army should not kill the Palestinian youth, because a youth killed by the army would then be honored as a martyr and thousands would follow their lead. He said that it is better to paralyze and disable the youth, knowing the way society looks down on disabled people.

This official decided that the army, especially the well trained 'death squads' should 'give their utmost effort' to paralyze the youth of the Intifada.

As for me, on that fateful April evening in 1991, I discovered at one point during the demonstration that I was surrounded by a group of masked men who pretended they were also Palestinian protesters. They tried to talk to me in Arabic and ask me about "the location of the soldiers" in an attempt to fool me, but the man who spoke to me didn't pronounce the Arabic words correctly. It was at that moment I realized that I was actually surrounded by a death squad.

When the man noticed that I had realized their true identify he pulled a small automatic gun from under his shirt, and I ran away knowing that even if I surrendered to him then, I would have been immediately assassinated, as had happened to so many Palestinian martyrs before me.

The man ran after me, along with the other undercover death squad members, until I came to an area were he was standing above me on a hill, just five meters away from me. When he shouted at me again, I began to turn, and I could see his eyes, or at least, what was visible of them from under his mask. It was at that moment that he started to shoot.

After five or six rounds penetrated my chest and back, I fell to the ground, motionless, soaked with my own blood. I could not feel anything, I could not see clearly, and I could not hear anything.

I fell down face first, injuring my face and breaking my teeth on the ground. Then the man approached me and kicked me in my chest, breaking four ribs, in order to flip me over onto my back.

The last thing I heard before I passed out was that man who shot me saying, "After all that, and you're still alive!?"

Those are words I can never forget, for they revealed to me at that moment the true identity of the Israeli army, the army of criminals and murderers.

In spite of the fact that the Israeli military ambulance was already present in my town when I was shot, apparently they believed that if the death squad was in town, that meant that death was there too, and they didn't show up until 30 minutes after I was shot.

When the Israeli ambulance crew finally arrived (no Palestinian ambulance was allowed in to take me), the medics told the soldiers that they should impose curfew because "I was dead". They thought there was no way I could survive such serious wounds – they were sure I would be dead within hours. During the first Intifada the army would impose a curfew every time they killed someone, thus punishing all the Palestinians in the area for the army's own misdeed.

Military medics tried to give me first aid there on the ground, I was bleeding so much it was flooding the area were I fell.

After the 'first aid' they gave me, they drove the ambulance to a military base in Bethlehem – as my body was fighting to stay alive, they went through their procedures, handing over my identity card to the military, filling out forms and filing their report before they even brought me to the hospital. I was driven out of Bethlehem (where there are two hospitals), and all the way to an Israeli hospital in Jerusalem, where it would be difficult or even impossible for my family to come see me due to the Israeli-imposed closure and checkpoints.

Meanwhile, a military commander in Bethlehem phoned my father at home, and told him that I was mildly injured in my face, leaving out the five bullets which were lodged in my lung and spine – apparently these bullets did not count as injuries.

When they finally transferred me to the Israeli hospital I was operated on for the entire night. The surgeon who operated on me decided that it was easier to cut off one third of my lung and throw it away with the bullets than to take the care needed to extract the bullets from the lung (a move which led a Palestinian reporter to editorialize that my 'surgeon had been a butcher in his past profession' in an article he wrote about my injury).

One of the bullets penetrated my spine – it went through my chest and lodged in my spine, causing paralysis. That fateful bullet has led to me being paralyzed from the waist down, for life.

In the morning, one of the doctors told my mother, "You have a new born baby for a son" — that was me, paralyzed, unconscious and half dead.

I woke up for a few minutes three days after my injury. I did not know anything, did not remember anything, I saw my mother next to me, I tried to speak but that was useless, she was tortured to see me there, I could feel it, and could easily notice her health had deteriorated fearing that I would die at any moment.

I tried to ask her what I was doing there, and she said, "Relax my son, you are alright", so I did, and "relaxed" for an additional seven days in another coma.

After those seven days, I was transferred out of the intensive care unit to another branch of the hospital, even though I still felt lost and unconscious even when I was awake.

Then, the hospital administration, after failing to make the army pay for my expenses, decided that I should leave, and told my father he must pay for the expenses. When they realized he could not pay, that he was without money, they told my father, "send him to an Arabic hospital, we saved his life, and he must go".

But I was in no condition to be moved at all. Out of intensive care, my condition deteriorated rapidly, and I had to go back to intensive care for another ten days. When they decided I was "ok" I had to leave, even though I was nowhere near the condition that would normally be acceptable for releasing a patient with such severe injuries – but after all, I was "just a Palestinian", and didn't seem to count for much in the Israeli hospital. In fact, the hospital even insisted that a Palestinian ambulance come to fetch me, for they could not bear the expense of using one of their own ambulances to transport me to a Palestinian hospital. So I was transferred (by a Palestinian ambulance) to Al-Makessed hospital in Jerusalem.

I was hospitalized for three months, during this time I kept losing a lot of blood, internally and externally, due to my injuries (and the part of my lung that had been completely cut out). I still couldn't think straight, couldn't figure out why I was there – I had only visions spinning in my head, and vague memories.

After that time, I was transferred to Abu Raya Rehabilitation center in Ramallah. By then I started to realize that my life had changed forever.

I received rehabilitation for several months. I can still remember the first time I could dress alone, it felt good to be able to dress or bathe alone after a lot of work and effort – something that, previously, I would never have thought difficult had become such a challenge in my new body.

Ten months after my injury I enrolled as a student at Bethlehem University and I studied four years, receiving my B.A degree in English and translation.

Now, many years later, am still paralyzed of course, but my life is a clear proof of the failure of the Israeli vision that paralyzing, injuring and killing us will make us give up. I have learned that the bullet which does not kill us makes us stronger.

So I am in a wheelchair, facing difficulties in life, facing repeated infections and bad health, but I am still the man who stood up to the Israeli occupation day after day and said NO to the occupiers.

One day I saw a program on Israeli TV about the special forces, the so-called 'death squads' which shot me. They showed scrambled pictures of soldiers talking about the attacks they carried out in Palestinian areas. Most of them are receiving psychological help now, and therapy. At that moment I felt victorious, after all they failed to kill my will and my internal strength, while these men who shoot unarmed youth with impunity are suffering internal torment and anguish for the crimes they have committed. I sit with my full mind, in honor, knowing I have done no wrong, and even after all they have done to me, I am still here willing to liberate my country, even while sitting on my wheelchair.

The spirit of revolution, the path of freedom requires sacrifices we need to be ready and willing to make, until we reach our legitimate goal of freedom and liberation.

Palestine is our dream, our heart and life, the spirit of revolution and the longing for freedom can never die. Their tanks, apaches, shells, and bullets of hatred can never win.