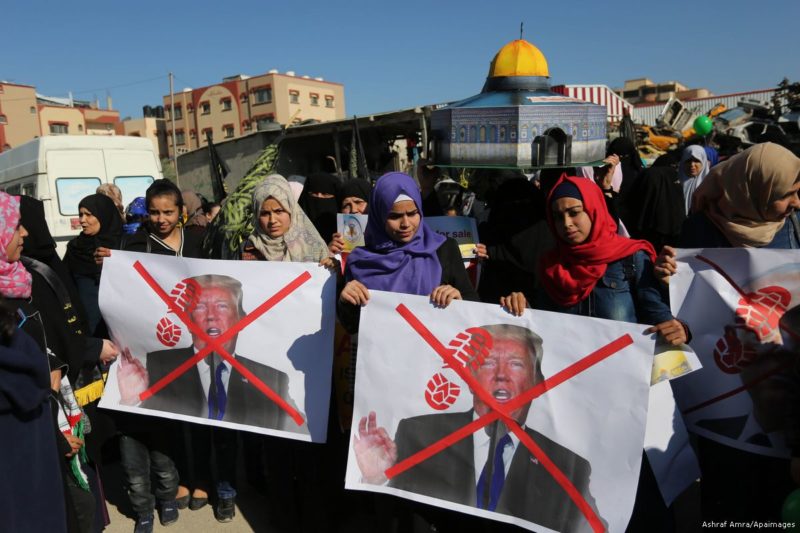 by Ramona Wadi, for Days of Palestine

When, in December 2017, US President Donald Trump unilaterally recognised Jerusalem as Israel’s capital, the protests in Palestine swiftly ignited a ripple of international solidarity. Activists in many countries protested against the decision, while world leaders repeated their carefully-crafted statements and considered their duty done. UN resolutions on Jerusalem, after all, remained the pinnacle of what the international community was willing to do which, in essence, amounted to nothing.

Palestinians are now protesting against the US move to legitimise Israeli settlements. Diplomats have already positioned themselves rhetorically against US Secretary of State Mike Pompeo’s statement, while Palestinian Authority leader Mahmoud Abbas, once again belatedly, has reportedly threatened to cut off all ties with Israel and the US for the umpteenth time. Meanwhile, activist support for Palestinians with regard to opposing the US decision has been minimal and mostly generated through social media; certainly not on the scale with which the demonstrations for Jerusalem attracted media attention worldwide.

Supporting Palestine and Palestinians must be constant, as opposed to depending on variables mostly determined by visibility. Jerusalem’s significance, rather than the Palestinian cause, was a decisive factor when it came to international demonstrations supporting Palestinians two years ago. However, the US decision regarding Jerusalem was the prelude to other oppressive measures against the Palestinian people. While Jerusalem was singled out as the epitome of violations, the US-Israeli alliance carried out their plan to facilitate the travesty of legitimising further colonial expansion in Palestine. Meanwhile, the systematic US plan to deprive Palestinians of their rights was generalised under convenient statements such as “violation of international law” without any further collective action.

Likewise, the repercussions of the US decision declaring settlements as “not illegal” is not merely in violation of what the international community has already stipulated. Furthermore, it cannot be separated from the other atrocities of which Israel is guilty with US approval. If settlements are purportedly “not illegal” according to the US, neither is the forced displacement that precedes the settlements, all of which constitutes the ethnic cleansing of Palestinians perpetrated by Zionists from before the 1948 Nakba.

Activism is replete with choices and dilemmas. The permeating political violence at times may constitute an obstruction as regards which cause to support and which issue should take precedence. However, there is one important distinction to make and which is imperative: activism must not be associated with, or influenced by, media and political sensationalism. If this happens, Palestine will be burdened with further misrepresentation when Palestinians are capable of representing themselves, their history and their memory; all they require are the spaces to do so.

100.000 March in London in Support of Palestine