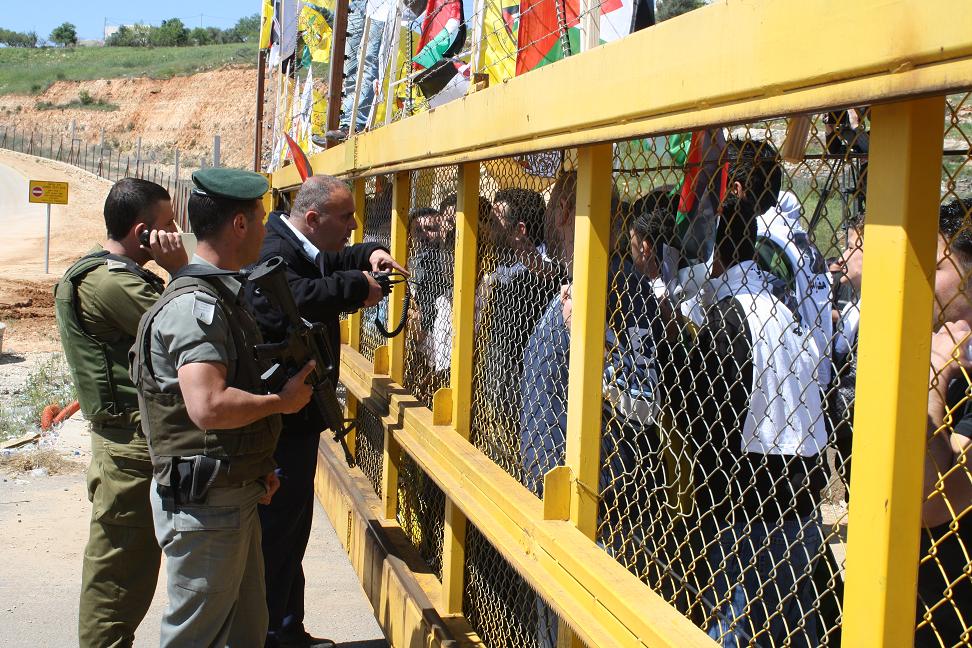 Two injured, dozens of people suffered effects of tear gas inhalation, and two were detained, on Wednesday afternoon, when Israeli troops attacked protests organized in Ramallah and Jenin, in the central and northern parts of the West Bank.
Hundreds of people gathered at the Ofer military detention center near Ramallah demanding the release of 10 Palestinians detained by troops on Sunday in the southern West Bank city of Bethlehem.

The ten community organizers including Abbas Zaki, a top Fatah leader, were detained during a protest organized on Palm Sunday in Bethlehem city demanding the right of free access to Jerusalem.

On Sunday, residents along with Israeli and international supporters forced their way into the gate of the wall separating Bethlehem from Jerusalem and walked into Jerusalem before Israeli soldiers attacked them using rifle butts and batons.

Today, clashes erupted when protesters tried to force their way into the Ofer detention center where the army is holding the 10 Palestinians detained during Sunday protest.

Clashes were also reported on Wednesday when troops attack a protest marking Land Day at the village of Turah near Jenin, northern West Bank. Villagers marched to the gate of the nearby settlement of Shaked originally built on lands taken from the local famers.

Troops used tear gas to suppress the protest and attacked local youth who hurled stones at them.

Three Israeli soldiers were lightly wounded during the clashes on Wednesday in Ramallah and Jenin, the Israeli army radio reported. On Tuesday Israeli troops opened fire at protests marking land day in the Gaza Strip and the West Bank, killing one child and injuring many other civilians.

Palestinians mark the Land Day since March, 30th 1976, when clashes erupted near the Palestinian town of Sakhneen, in response to the Israeli government’s plans to expropriate thousands of Palestinian-owned acres of land. A general strike and protests were organized in Arab towns from the Galilee to the Negev, met with severe violence from the Israeli police killing six Palestinians and wounding hundreds.