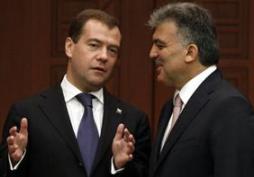 Both Russia and Turkey stated, Wednesday, that that International Community must deal with Hamas due to the party’s support from the Palestinian people in the 2006 elections; deemed to be fair and free elections, and that they cannot be ignored.The two countries also called on the Palestinian factions to unite, and to end the current conflict between the rival Fateh and Hamas movements.

During a press conference with the Russian President, Dmitry Medvedev, in Ankara, Turkish President Abdullah Gul, stated that peace cannot be achieved in the Middle East without Hamas.

Gul added that the International Community cannot rule out talks with Hamas, and that the Palestinians must unite.

He said that Hamas achieved an overwhelming victory in the legislative elections of 2006, therefore it cannot be ignored and is considered an important party in any solution.

Gul further stated that Turkey was threatened when it held talks with Hamas, and added that peace cannot be achieved by alienating the movement.

Furthermore, Russian President, Dimitry Medvedev, stated that Hamas and all parties should be included in the political process, and that the movement cannot be ignored.

Medvedev also stated that the situation on Gaza must be resolved in order to end the humanitarian crises there due to the ongoing siege.

It is worth mentioning that Medvedev and the Syrian President, Bashar Asad, met on Tuesday with Hamas’ Political Bureau Chief in Syria, Khalid Mashal, and discussed with him several files topped by the situation in Gaza, national reconciliation and the prisoner-swap deal.