Eight Detainees Injured, Dozens Treated For Gaza Inhalation After Being Attacked By Soldiers 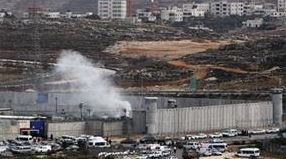 Undercover Forces of the Nahshon Israeli Military Unit, broke on Wednesday at night into the Ofer Israeli military detention center, and attacked Palestinian detainees wounding eight while dozens suffered the effects of tear gas inhalation. Eight Palestinian detainees suffered fractures and concussions after being violently assaulted by the soldiers who broke into their rooms, fully armored, fired gas bombs and attacked the detainees with batons and rifle-buts.

Although soldiers broke into several sections at the detention facility, the main attack was focused on section 14 as the soldiers searched the rooms, and forced the detainees to undress under the pretext of searching them.

The undercover forces also used dogs during the search but did not locate anything “unusual”.

It is worth mentioning that Ofer prison includes two main buildings that consist of 10 sections where more than 12000 Palestinian detainees are held.

Detainees in Ofer are mainly those who received administrative detention, orders in addition to those who were not sent to court, and the detainees who were sentenced by military courts but were not moved to other prisons.