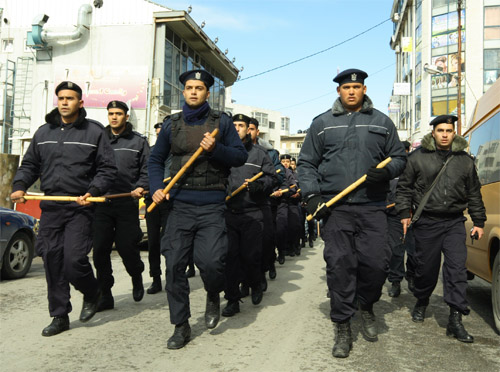 Palestinian Authority security spokesman, Adnan Ad-Dmeiri announced on Thursday that the PA has forbidden ‘unlicensed gatherings’ in order to preserve order in the West Bank. The PA official said this decision comes in response to demonstrations in solidarity with uprisings in Egypt and Tunisia.

Ad-Dmeiri said the PA respects the right of expression but that the demonstrations would create chaos.

He also added that the priority for Palestinians was to empower popular resistance against the occupation and to work for independence.

On Wednesday PA security forces violently interrupted and shut down a rally in Ramallah in support of the Egyptian people and detained at least two demonstrators.

Protesters said the event had been peaceful until police broke out batons and started pushing women at the front of the group back and away from the city center.

PA forces also shut down a rally outside the Egyptian embassy in Ramallah on Sunday, after calling in one of the organizers for questioning multiple times a day earlier, organizers of the rally said.