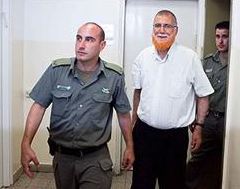 Israeli soldiers kidnapped, on Tuesday at dawn, Palestinian legislator Mohammad Abu Teir, and took him to an unknown destination.Abu Teir, of the Hamas Change and Reform Parliamentary bloc, was kidnapped after the army surrounded his home in Kafr Aqeb, between Ramallah and Jerusalem.

In December last year, Israel issued an order to deport Abu Teir from his hometown, Jerusalem.

Israel also wants to deport two other elected Jerusalem legislators, in addition to the former Jerusalem Affairs Minister, Khaled Abu Arafa. All have been holding a sit-in protest at the Red Cross in Jerusalem since more than a year.

Ahmad Bahar, deputy head of the Palestinian Legislative Council, slammed the arrest of Abu Teir, and stated that Israel wants to remove the legitimate elected leadership in Palestine.

Bahar added that the Legislative Council will continue to perform its duties, and that the Israeli violations will not deter the Palestinians, and their elected leaders, from perusing their right to liberty and independence.