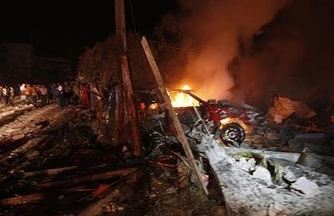 Palestinian medical sources in the Gaza Strip reported that one Palestinian was killed and eleven others were wounded in two Israeli Air Strikes in one hour, which targeted Gaza City The sources stated that eight Palestinians were wounded, two seriously, when the army fired missiles at a Palestinian Jeep driving near a gas station in Al Jala’ neighborhood in Gaza City.

One Palestinian was killed and three others were wounded in an earlier air strike targeting a Palestinian driving a motorcycle in Jabalia, in the northern part of the Gaza Strip.

The Israeli army claimed that the attack targeted fighters who fired shells at Israeli areas adjacent to the Gaza Strip.

In a separate attack, soldiers fired rounds of live ammunition at homes and property east of Khan Younis, in the southern part of the Gaza Strip; no damages or injuries were reported.

December 27, marks the third anniversary of the three-week Israeli war on the Gaza Strip in which more than 1,419 Palestinians were killed and thousands were wounded. Among the killed were 412 children, and approximately 280 medics and members of the civil defense.

The Palestinian Center for Human Rights (PCHR), based in Gaza, reported that December 27 2008, the day the Israeli war started on Gaza, was the bloodiest day as Israeli soldiers killed 334 Palestinians (77% of them civilians).

The PCHR said that 1,419 Palestinians were killed during Operation Cast Lead, 1,167 (82.2%) of whom were civilians. A further 5,300 were injured. Israeli forces directly targeted and attacked private homes and civilian institutions, including hospitals and schools.

One Killed, 3 Injured in Israeli Air Strike North of Gaza

One Palestinian was killed and three others were injured as an Israeli air strike targeted on Tuesday evening a Palestinian vehicle near Abu-Sharkh Square in the city of Jabaliya, north of the Gaza Strip, the Maan News Agency reported Tuesday evening.

Meanwhile, eyewitnesses confirmed that at least three Palestinians were riding a vehicle when an Israeli warplane fired one missile towards them.

PCHR Report On The Third Anniversary of the War