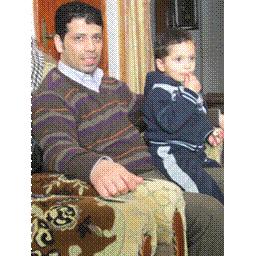 In 2009, after undertaking a series of medical tests in Egypt, Akram was diagnosed with chronic myelocytic leukaemia, a severe cancer of the blood cells. Since 2010 he has been prescribed Glivec, a new drug that has significantly increased patients’ survival rate. Since he has begun taking Gilvec, the spread of the cancer to other parts of Akram’s body has been prevented and his quality of life has improved dramatically.

“This medicine has changed my life,” says Akram. “Since I started the treatment with Glivec the symptoms of the leukaemia have subsided and I feel healthy again.” However, since January 2012 Gilvec has been unavailable in the Central Drug Store in Gaza. Although a small amount of Glivec, covering the needs of 69% of these patients arrived on 15 March this supply was only sufficient for twenty-five days.

Akram’s wife, Mervat, explains her anxiety. “My husband suffers from strong headaches and from pain in his legs. I try my best to cook food that can compensate the problems caused by his blood disease.”

The doctor told them that the interruption of the treatment would have severe consequences on Akram’s health. The lack of blood cells in his blood may cause tiredness, respiratory and kidney failure. Nevertheless, he tries to deflect the attention from his individual case “there are many other patients in my same situation, my case is not the only one in Gaza.”

At present, thirty-two cancer patients depend on the supply of Gilvec for their survival. “Palestinians can find ways to get electricity, fuel and food but there is no alternative for us to get the medicines. This is a question of life or death” says Akram. In fact, this is not the first time that Gilvec has been unavailable in Gaza, last year Akram had to interrupt his treatment for one and a half months. The high cost of Gilvec, at US$3,700 for a monthly treatment, prevents patients from obtaining it from non-governmental sources.

“The prevention of medicines to enter Gaza is political. By keeping our minds busy with the lack of electricity, fuel and medicines Israel aims at increasing our individualism as a way to undermine the constitution of our State. They [Israel] are not only killing the sick, they are destroying the entire life of Palestinians.”

According to Na’el Shih, the director of the Drug Store at Shifa hospital in Gaza city, 80% of the medicines needed by patients are missing. “We are dying in here. One hundred eighty six medicines are currently depleted from the Central Drug Store of the Ministry of Health in Gaza. The remaining stock will be finished within the next 2-3 months. Since two months there have been no hepatitis vaccinations for newborn in Gaza.”

Due to financial deficiencies, the shortage of medicines affects particularly to expensive treatments such as those related to cancer, kidney transplantation and liver. “Despite these treatments are lifesaving for the patients, the hospital is unable to ensure their supply.”

The International Covenant of Economic, Social and Cultural Rights recognises the ‘right of everyone to the enjoyment of the highest attainable standard of health.’ The Palestinian authorities in the Gaza Strip and in the West Bank are severely endangering this right when they politicise the provision of health assistance to gazans. Israel, as the Occupying Power in Gaza, also “has the duty of ensuring and maintaining, with the cooperation of national and local authorities, the medical and hospital establishments and services, public health and hygiene in the occupied territory.”