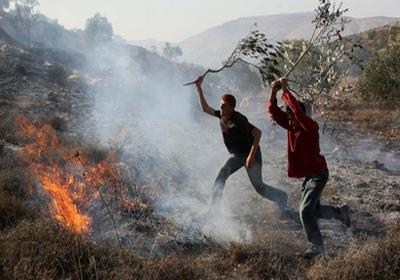 A group of extremist Israeli settlers uprooted, on Wednesday morning, 41 olive trees that belong to a resident of Tal village, west of the northern West Bank city of Nablus.Ghassan Douglas, in charge of settlements file in the northern part of the West Bank, issued a press release stating that settlers of Havat Gilad illegal settlement outposts uprooted the trees that belong to resident Nayef Rehaan.

The official denounced the recent attacks and the ongoing violations and assaults carried out by the settlers, and demanded legal and human rights groups intervene and put an end to these violations.

In related news, on Wednesday at dawn, Israeli soldiers invaded the Al-Majd village, west of the southern West Bank city of Hebron, where they broke into several homes and confiscated a number of vehicles owned by the residents.

Eyewitnesses reported that the army used military dogs in searching the homes, while the soldiers sabotaged property.

Also on Wednesday at dawn, soldiers invaded the Deheisha refugee camp, in the West Bank city of Bethlehem, and kidnapped two residents.

Eyewitnesses reported that undercover soldiers driving a Mercedes carrying Palestinian license plates, infiltrated the camp, before smashing the front of a home that belongs to Nayef Ramadan, and kidnapping his son Abdullah.

Regular units of the army invaded the camp shortly after the undercover forces kidnapped Abdullah, and went on to kidnap another resident identified as Nidal Al-Hasanat.

Soldiers also broke into the home of Ayman Mheisin and searched it.
Dozens of local youths in the camp clashed with the invading soldiers by hurling stones and empty bottles; the army fired rounds of live ammunition, rubber-coated metal bullets and gas bombs. No injuries were reported.