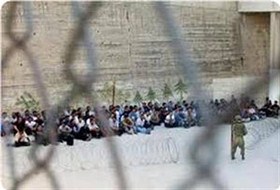 The Detainees’ Study Center reported Wednesday that, following the release of detainee Mahmoud Sarsak on Tuesday, one Palestinian detainee remains imprisoned under the Israeli “Illegitimate Combatant Law”.Detainee Osama Hajjaj Az-Zaree’ey has been held by Israel without charges or trial since June 2, 2008; back then, he received a six-month detention order without charges, and Israel kept renewing these orders against him since then under the claim that he is an “illegitimate combatant”, but never filed charges against him.

Nearly 45 days ago, Israel release Rami Sayyed Abu Jalala, from Jabalia in the northern part of the Gaza Strip, after holding him under the “illegitimate combatant’ order for 3 consecutive years without any charges or trial.

Riyadh Al-Ashqar, head of the Media Department at the Detainees Study Center, stated that Israel passed the “illegitimate combatant law” in December of 2005, following it’s withdrawal from the Gaza Strip.

This law allows Israel to indefinitely detain Palestinians from the Gaza Strip without any charges or trial, without granting the detainees any of their rights guaranteed by International Law, and the Fourth Geneva Convention.

The law is similar to the Administrative Detention orders Israel issues and renews against hundreds of detainees, without charges or trial, but the Illegitimate Combatant Law was specifically designed for Gaza Strip detainees, believed to be members of the armed resistance, despite the fact that no charges are ever filed against them.

Al-Ashqar stated that at a certain period of time, Israel held 29 Palestinians under this law, especially during the three-week war on the Gaza Strip in late December 2008.

All of the, including Sarsak, have been released. Right now, Osama Hajjaj Az-Zaree’ey is the only detainee held under this law.