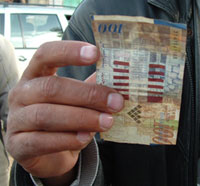 The Palestinian Authority stated yesterday that part of employees’ salaries would be paid today, Thursday July 12. Salaries, which are usually paid on the 7th of each month, have not been paid due to aid to the PA being delayed.Nabeel Qassis of the PA Ministry of Finance stated that 60% of employee salaries would be transferred to their bank accounts today.

Qassis stated that the PA is facing its worst crisis in recent years due to a lack of promised funds being delivered.

To date, the PA has received only US$ 466 million of US$ 1.2 billion promised this year.

The US, which had pledged US$ 200million, failed to deliver in June as promised. Saudi Arabia had promised US$ 95 million, but as yet, this has not been received. Palestinian President Mahmoud Abbas is expected to visit Saudi Arabia in the coming days to discuss the crisis.

Secretary-General of the PLO, Yasser Abed explained that Abbas had chosen to visit Saudi Arabia as ‘it has always been supportive to the PA at all levels.’