Obama, Romney Fight to See Who Can Support Israel the Most 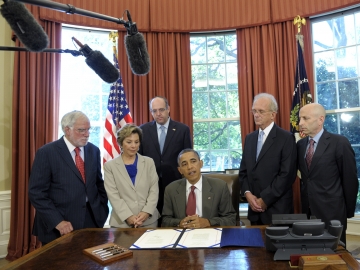 The United States has long been one of the fiercest allies of Israel on the international stage. The 2012 presidential election has highlighted this relationship, perhaps more than ever before, as both President Obama and Mitt Romney do all they can to reinforce their commitment to Israeli desires.Over the weekend presumptive Republican nominee Mitt Romney flew to Israel after a series of embarrassing gaffes during what was supposed to be a simple trip to the United Kingdom. The backlash Romney faced in London was not repeated upon his arrival to Tel Aviv. The former Governor and pronounced Christian Zionist got along well with Prime Minister Netanyahu and professed the failures of the Obama administration while proclaiming his vision for Israel in 2012.
Romney turned much of his focus to Israel’s primary foreign policy obsession: Iranian nuclear weapons. The Romney campaign is unflinching in its hawkish attitude toward Iran. Despite international reports revealing that Iran does not have nuclear weapons capability, and conflicting reports regarding whether or not Iran is actually building a weapon, the Romney camp firmly believes the Islamic Republic is a threat to Israeli security.
Israel has threatened to attack Iran at a moment’s notice. Iran has publically expressed its desire to continue nuclear energy research in peace. Yet, Iran is the threat and Israel the champion for peace and democracy in the Middle East.
Romney addressed Palestine as an issue for peace and security, but again was staunchly supportive of Israel, according to Al Jazeera. He stated that Palestinians must give up their claim of ‘Right of Return’ if there is to be hope of renewed peace negotiations. This ignores the fact that Israel walked away from the last round of talks not because of ‘Right of Return’, which is not even a platform position of the Palestinian Authority, but because Netanyahu refused to discuss withdrawing from the more than 200 illegal settlements in the West Bank.
The inclusion of a discussion of the return of refugees to their former homes in Israel was a political red herring. By stating his full support Romney tacitly implied that President Obama is not fully supportive of a dear issue of the Israeli government – in actual fact, the president has always maintained that ‘return’ was an issue to be decided by Palestinians and Israelis, not by American politicians.
With Romney taking so many shots at the Obama administration for not being supportive enough of Israel the White House was compelled publically state its support for Tel Aviv. Obama even signed a new defense initiative meant to give more American money and materiel to the Israeli military, reports Haaretz.
In addition to the cash handout the White House is sending Defense Secretary Leon Panetta to Tel Aviv on Wednesday to express once again their mutual concern regarding Iranian nuclear weapons, reports The Washington Post.
Any American presidential candidate who is not firmly supportive of Israel is virtually unelectable. American outlays to Israel are higher under the Obama administration than during any previous presidency, but many Americans (and a vast majority of Republicans) still believe the president is not doing enough to support our ally.
Are there not more important issues for American voters than Israeli security? The fact of the matter is that there will be no peace in the Israeli-Palestinian conflict so long as the United States is taking sides. American tax dollars in the past decade have funded both the segregation wall and the illegal settlements that have ruined any prospect for a stable and sustainable Palestinian state in the West Bank.
By funding Israel the United States is contributing to the problem not the solution. More importantly, but taking one side in a conflict that is open to interpretation the United States is giving up any objective moral authority it might otherwise carry.
The United States has major issues of its own to address, absolutely none of which can be solved by supporting Israel (or Palestine, for that matter). Furthermore, Israel and Palestine have serious concerns of their own to deal with and neither side can return to the negotiating table with the United States butting into the room.