Palestinian Forced To Demolish His Own Home In Jerusalem 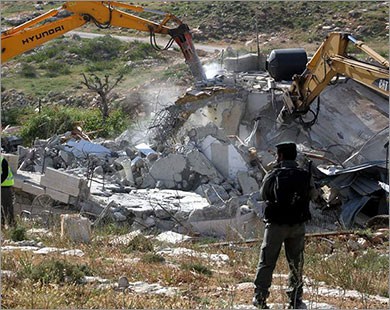 Monday March 4 2013; A Palestinian resident of occupied East Jerusalem was forced to demolish his own home in Jerusalem’s Old City in order to avoid high fines that would be imposed on him should the Jerusalem Municipality demolish the home after it ruled that the property was constructed without a permit.Daoud Sa’id, the owner of the property, stated that he demolished his own 60 square/meter home, located in Bab Hatta in the Old City, in order to avoid an 80.000 New Israeli Shekels (NIS) fine. (More than $21.000).

Sa’id added that he built his home 11 years ago without a construction permit as the City Council kept rejecting his applications, and that he recently paid the District Court more than 32.000 NIS (Approximately $8.500) when he filed an appeal against the destruction of his property, but the appeal was denied.

“Now after they have demolished our home, my family and I have to live in a tent, “he said, “I’m still worried the Jerusalem Municipality would impose more fines on me”.

Israel repeatedly rejects construction permits to Palestinians living in occupied East Jerusalem, an issue that pushed the residents to build without permits in order to fulfill the needs of their growing families.

According to data collected by the Israeli Committee Against Home Demolitions (ICAHD) and was published a few months ago, Israel’s demolition of Palestinian homes is a systematic policy that aims at forcing the Palestinians to leave Jerusalem in order to maintain Jewish majority.

ICHAD estimates that Israel demolished at least 24.145 homes in the West Bank, East Jerusalem and the Gaza Strip since 1967.