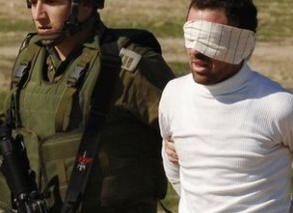 Thursday morning March 14, 2013, Palestinian medical sources in Nablus in the northern part of the occupied West Bank, reported that dozens of Palestinians have been treated for the effects of teargas inhalation, after the army invaded Talfeet nearby village and clashed with local youths. Army also kidnapped six Palestinians in the Nablus district.Eyewitnesses said that most of the injured Palestinians are schoolchildren as the army surrounded the schools area after invading it, and fired gas bombs at residents protesting the invasion.

The eyewitnesses added that the invasion targeted the Post Office area in the center of the village, and the nearby Al-Batma area.

Also on Thursday, the army invaded the Industrial Zone in Beit Eeba village, west of Nablus, and kidnapped one resident.

The army broke into the Near East Trade and Industry Company, interrogated the workers while inspecting their ID cards, and kidnapped Abbas Abu Mustafa.

Furthermore, the soldiers invaded the Old City of Nablus, broke into and searched several homes, and kidnapped five Palestinians.

Media sources reported that the army carried out dozens of invasions, on Thursday at dawn, targeting different parts of the occupied West Bank, and kidnapped at least 23 Palestinians after violently breaking into their homes and searching them.