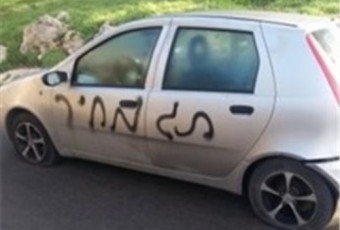 [Tuesday August 27, 2013] Local sources in Beit Safafa town, in occupied East Jerusalem, has reported that a group of extremist Israeli settlers punctured the tires of 10 Palestinian cars in the town, and wrote racist “Price Tag” graffiti.The attack apparently took place late at night, or at dawn, as the residents only found out after they headed to their cars.

The residents filed complaints to the Israeli Police demanding an end to the escalating attacks carried out by Israeli extremists against Palestinian property.

The attack only comes one day after Israeli extremists defaced a wall of a wall of a local Palestinian home, in Al-Khan Market area in the Old City, in occupied East Jerusalem.

Racist Price Tag graffiti, used Price Tag extremist Israeli groups, were found on the exterior walls of the church.
A week ago, Israeli extremists threw a Molotov cocktail at a Christian Monastery in the Deir Jamal area, between Jerusalem and Ramla.

On Friday [June 7 2013], Israeli extremists burnt a Palestinian car in Sheikh Jarrah neighborhood.
Dozens of Price Tag attacks have been carried out against Churches, Mosques, Islamic and Christian graveyards.
On June 12 2013, the Israeli Police revealed that extremist Israeli groups carried out 165 Price Tag attacks against the Palestinians and their property, in the West Bank, and in the 1948 territories since the beginning of the year.