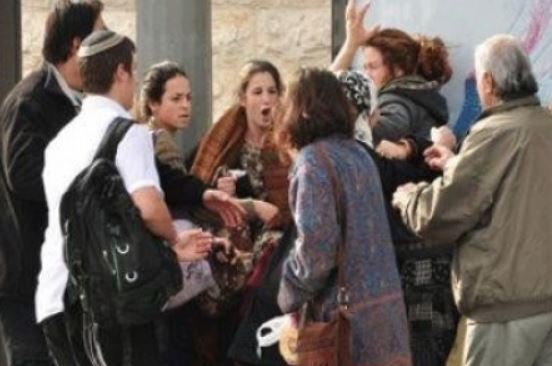 Wednesday at night [September 25, 2013] a group of extremist Israeli soldiers attacked several Palestinian youths in the Al-Qarmy neighborhood, in occupied East Jerusalem, as they verbally confronted settlers who marched there.Resident Ashraf Abu Da’aas, stated that approximately 400 settlers organized provocative marches in the Arab neighborhoods of Saraya, Al-Hakary, and Al-Qarmy, and were dancing and chanting provocative chants against the Arabs and Palestinians, in addition to chanting “Jerusalem is ours”.

Da’aas added that dozens of residents stopped the settlers and prevented them from conducting their provocative procession in their neighborhood, before dozens of Israeli soldiers and police officers arrived at the scene, and attacked the Palestinians.

Furthermore, Da’aas said that the Police eventually stopped the settlers’ procession of before some of them headed to settlement outposts in the city, while others went to the Al-Boraq Wall.

The Police also prevented the Palestinians from leaving their neighborhoods, allegedly to prevent further confrontations, but did not restrict the movement of the settlers.