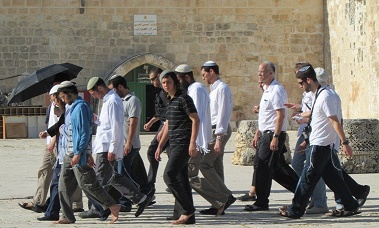 [Thursday, May 22, 2014] Israeli police officers kidnapped a Palestinian working for the Waqf and Islamic Endowment Department, in the al-Aqsa Mosque in occupied East Jerusalem, while dozens of Israeli extremists stormed the yards of the mosque.The Palestinian News & Info Agency (WAFA) has reported that that the police, and undercover officers, kidnapped Suleiman Abdul-Latif, and took him to a police station in the occupied city.

WAFA added that dozens of Israeli fanatics stormed the yards of the Al-Aqsa Mosque, through the al-Magharba Gate area.

They carried structural plans and maps of the “Temple” that would be “rebuilt in place of the Al-Aqsa Mosque”.

Dozens of Muslim worshipers stopped the invading fanatics, before the police attacked the Palestinians and kidnapped Abdul-Latif.

On Wednesday and one Tuesday, Israeli soldiers ordered nine Palestinians away from the Al-Aqsa Mosque, and threatened to imprison them.

The two were among a group of Palestinians who managed to foil an attack by a number of Israeli fanatics.