Hamas: No Reply from Israel on Ceasefire 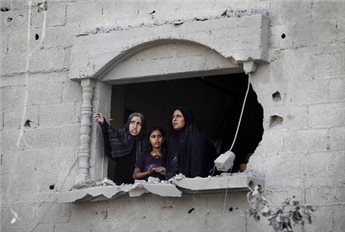 [Thursday Evening 8/7/14]: Hamas has stated that Israel has not yet replied to its ceasefire offer, warning of an ‘escalation’ in hostilities should Israel failed to do so — this just hours before the three-day ceasefire is set to expire at 8am on Friday.According to Ma’an, sources privy to the Cairo ceasefire talks stated that a meeting would be held around 10:30pm, Thursday night, between Palestinian delegation officials and the Egyptian intelligence minister, in order to relay the Israeli response to Hamas’ demands.

Sources indicate the possibility of an extension of the current ceasefire to another 72 hours, that attempts to reach a lasting ceasefire may continue.

Hamas’ demands are consistent with the terms of the Oslo Accords, Ma’an further reports. The agreement was jointly signed between Israeli and Palestinian officials in the 1990s, but Israel has failed to abide, and continues to publicly denounce Hamas as a terrorist group.

The Israelis are apparently willing to extend the ceasefire indefinitely, but insist that a long-term agreement should include the demilitarization of the Gaza Strip.