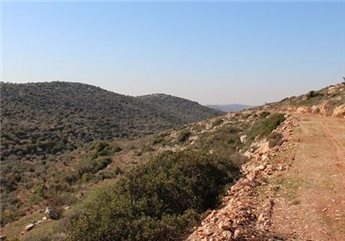 Israeli authorities confiscated 20 dunams (approximately 5 acres) of Palestinian-owned land, today near the Jewish settlement bloc of Ariel, in the northern occupied West Bank. A UN official has noted that ongoing Israeli settler violence and imposed access restrictions continues to adversely affect the lives and livelihoods of Palestinians.Israeli bulldozers in the Palestinian village of Haris, near the Barqan settlement, on Thursday, began razing some 20 dunams of agricultural lands, while dozens of Israelis from nearby Ariel came to participlate in destroying the fields.

According to Ma’an, the seizure and destruction of Palestinian agricultural resources comes on the same day that Palestinian officials working in coordination with the local Committee Against Israel’s Separation Wall and the Settlements announced that they had succeeded in saving 15 dunams of land from confiscation, just a few kilometers away, in the southwestern part of the Ariel settlement bloc.

A statement from the Salfit governorate said that the land, located in the village of Bruqin, had been under threat since its owners were served with an evacuation order, in 2013, which stated that the land was Israeli state property.

Representing the Committee Against Israel’s Separation Wall and the Settlements, lawyer Alaa Mahajna manged to prove that the land was privately-owned Palestinian property that has been under constant cultivation by the owner.

OCHA official James Rawley stated, Thursday, that the ongoing settler violence, in conjunction with recurring access restrictions imposed by Israeli authorities on Palestinians, with regard to olive groves, continues to negatively impact their lives and livelihoods.

According to WAFA Palestinian News & Info Agency, Mr. Rawly (along with members of the diplomatic and donor community, the Ministry of Agriculture, and representatives of humanitarian organizations) visited the towns of al-Janiya in the Ramallah governorate, as well as Biddu in the Jerusalem governorate, today, where community representatives and olive farmers detailed the adverse effect that continued settler violence and access restrictions to their groves have had on their lives and livelihoods.

UN agencies and non-governmental organizations (NGOs) reportedly briefed the delegation on programs which are specifically dedicated to supporting al-Janiya and Biddu as productive olive-producing communities along others in the West Bank.

Mr. Rawly said that the annual olive harvest is a vital economic, social and cultural component for the Palestinian livelihood, because “nearly half of all cultivated land in the occupied Palestinian Territories (oPt) is planted with olive trees.”

Olive-growing communities located between the apartheid wall and the 1967 borders, as well as in the vicinity of West Bank Israeli settlements, face serious challenges in maintaining and harvesting their olive crops. “This undermines livelihoods and increases dependency on aid,” a statement from the OCHA read.

Rawly called for immediate action in support of Palestinian olive farmers to ensure protection from settler attacks; accountability for their violence; the lifting of restrictions on land access; and support to olive producing communities.

He additionally warned that the ongoing neglect would lead to severe damage to the olive sector in the West Bank as, according to OCHA statistics, the olive oil industry constitutes 25% of Palestinians agricultural income.

In the period between 2006 to the end of September 2014, OCHA recorded over 2,300 settler-related incidents which resulted in Palestinian casualties or property damage in the occupied West Bank, including East Jerusalem.

In 2013 alone, nearly 400 incidents of settlers’ violence against Palestinians in the oPt were accounted for by the OCHA.

Meanwhile, in the period from 2009 to the end of August 2014, nearly 50,000 fruit-bearing trees — mainly olive trees — were reported damaged or destroyed in such incidents.

Furthermore, approximately 150 Palestinian communities share land located between the Wall and the 1967 borders, with only 50% of the farmers allowed access to their land during the harvest, season in the last four years, revealed OCHA statistics.

On October 10th of this year, the International Solidarity Movement (ISM) reported that an olive farmer, Mahmoud Eid along with his wife and three children were attacked by a group of Israeli settlers from ‘Giv’at Ya’akov’.

The family, present on its land near the village of Burin, to the south west of Nablus, was attacked by five male settlers. According to the ISM report, the settlers threw rocks at the family while Eid tried to protect his loved ones by covering them with the canvas usedto collect fallen olives.

Subsequently, the settlers physically attacked him, hitting him in the chest, stomach, head and foot, badly bruising him.

Mr. Eid’s story is just one of many in which Palestinian civilians suffer from either severe physical injuries, loss of property, produce and trees or other forms of economic disenfranchisement.

WAFA correspondence further reports that a group of Israeli settlers recently broke into a privately owned Palestinian area of land near Tulkarem, in the northern occupied West Bank, where they stole 10 large sacks stuffed full of olives.

The farmer had left the crop about two days ago, after being assaulted by illegal Israeli settlers.

Since the beginning of the 1967 occupation of the West Bank, Israel has confiscated hundreds of thousands of dunums by declaring it state land.

Israeli authorities in 1968 banned Palestinians from registering their lands and subsequently took advantage of previously low rates of land registration to confiscate areas currently or previously in use by locals but not registered as such.

The confiscated lands are then used to construct Jewish-only settlements on the land, while further confiscation often uses the pretext of the settlements’ security.