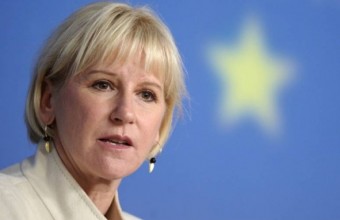 Sweden’s Foreign Minister, Margot Wallstrom, today, said she would be ‘happy’ to send Israeli Foreign Minister Avigdor Liberman some IKEA furniture.PNN reports that Wallstrom’s comments, made during a recent CNN interview, came after Mr. Lieberman, in denouncing Sweden’s decision to recognize the Palestinian Authority (PA) as ‘the State of Palestine,’ said that ‘relations in the Middle East are a lot more complex than the self-assembly furniture of IKEA’.

‘I think it’s a sign of a sense of humor, and I will be happy to send him a flat pack of IKEA furniture and he will also see that what you need to put that together is, first of all, a partner,’ Wallstrom said in response.

‘You also need to cooperate and you need a good manual. I think we have most of those elements if we want to use them also for the conflict in the Middle East. For peace you need two parties to actually sit down at the same table and discuss the future,’ she added.

‘We think that now is the right time [to recognize a Palestinian state]. We think that the legal requirements are fulfilled but also it is timely because we’ve had a very serious situation on the ground.

‘We hope that we can make the parties a little less unequal, that we might inject some new dynamics into the suspended peace talks and also give hope to young people that there is an alternative to violence and war and conflict.’