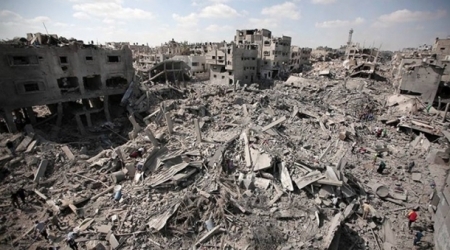 PNN correspondence revealed, on Thursday, that the UN has decided to deduct $30m worth of ‘administrative costs’ from the aid donated for reconstructing the Gaza Strip.An Egyptian official, speaking on condition of anonymity, reportedly said that a number of media outlets announced a deduction of some $800,000 by the UN, as a first payment for about 24,000 UN employees. He further stated that the total sum deducted from the expected financial aid for Gaza is $30 million, according to Days of Palestine news publication.

Egypt‘s foreign ministry was said to have expressed ‘extreme surprise’ over the United Nation’s decision to deduct the funds, which are urgently and immediately needed by Gaza residents.

PNN notes that the UN has suggested a proposal for the entry of construction materials to the Strip that has been described as an extension for the Israeli siege on the enclave.

In related news, Al Ray further reports that Qatar has pledged to fund the purchase of fuel needed to operate Gaza’s only power plant for a three-month period:

PM Al-Thani’s reaffirmation of his country’s support for the Palestinian people, and especially those in the devestated Gaza Strip, was highlighted in the statement.

Gaza’s sole power plant went offline on July 29th of this year, after its main fuel tank was attacked from the air by Israeli jets.

(Palestinians have no official military to speak of; Gaza’s response to the months of relentless provocations which preceded Israel’s assault on the region was assumed, once again, by armed partisan factions who, despite staunch resistance, were helpless to defend Gaza’s civilian infrastructure.)

Furthermore, even though the plant remains functional, it has stopped running due to chronic fuel shortage.

A relatively small stretch of land, and exceedingly overpopulated, the Gaza Strip is said to require around 360 megawatts per day – of which only 200 megawatts are currently available – to meet the needs of some 1.9 million residents. Before the air strikes, residents were making due with 8 or less hours of electricity per day.

Gaza currently has three sources for electricity, Al Ray reports: Israel, which provides 120 megawatts; Egypt, which supplies 28 megawatts; and Gaza’s power plant, which generates between 40 and 60 megawatts on average, per day.