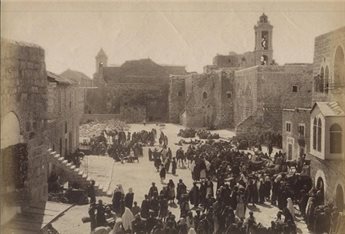 Open Bethlehem, a documentary film detailing the effects of the Israeli occupation on the ancient biblical city, is due to premiere in the United Kingdom this week.This documentary film, by Leila Sansour, is part of a larger campaign of the same name to raise awareness about the crisis facing the Palestinian city.

‘I think Bethlehem is a microcosm for Palestine, and a very good one. There is almost no aspect of the nature of the Israeli occupation that does not hit you face on,’ the filmmaker told Ma’an News Agency, in September.

‘We need to fight tooth and nail for Bethlehem if we want it to survive as the city we know; otherwise it will just disappear.’

The film is set to open in London on Dec. 5, with screenings across the United Kingdom throughout the month.

The documentary was named by The Guardian as the ‘one film you should watch this week.’