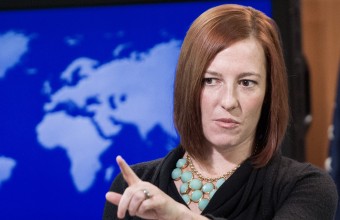 Washington, after seeing the text of the draft resolution circulating in the UN security council, Thursday, said that they had decided to not back it. US State Department spokeswoman Jen Psaki stated that it is not ‘something that we would support’, adding:

‘We think others feel the same and we are calling for further consultations. The Palestinians understand that.’

According to the PNN, Psaki said that her government’s problem with the text is the 12-month timeline for wrapping up the peace negotiations, and the 2017 deadline for the Israeli withdrawal from the Palestinian territories.

‘We wouldn’t support any action that would prejudge the outcome of the negotiations or would set a specific deadline for withdrawal of security forces,’ Psaki further stated.

Psaki referred to Mahmoud Abbas’ statement saying that he would support further consultations. She additionally stated that US Secretary of State John Kerry had been holding discussions with different parties on Thursday.

‘We’ve been clear about what our principles are, and the fact that we could support certain forms of resolution, but those discussions are private,’ she said.

Washington has repeatedly vetoed Security Council resolutions seen as undermining the authority of Israel, who it claims is an American ally.