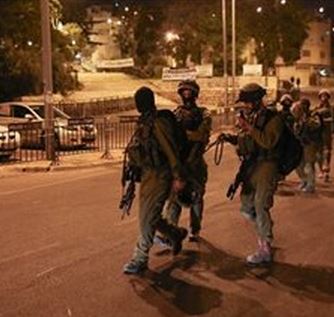 Israeli soldiers invaded, on Thursday evening, several Palestinian neighborhoods in occupied East Jerusalem, imposed a siege on a number of areas, and kidnapped seven Palestinians.The invasion took place after the Israeli Police said an Israeli settler was moderately wounded, after being allegedly stabbed by a Palestinian, who fled the scene.

Local sources in Jerusalem said the soldiers kidnapped seven Palestinians, and that three of them have been identified as Mohammad Hijazi, Mohammad Maswada and Khaled al-Qawasmi.

The police closed various roads in the Old City, and started searching and interrogating the Palestinians in the alleys and neighborhoods of occupied Jerusalem.

The soldiers imposed siege on Bab al-‘Amoud, Bab al-Asbat, and Bab as-Sahera Gates, and prevented the Palestinians from entering or leaving.

Eyewitnesses said the soldiers deliberately provoked local residents, especially young men, and detained some of them for several hours.

They also searched cars in Sultan Suleiman area, and interrogated the passengers.

Many residents were shot by rubber-coated metal bullets, and several others were assaulted by the soldiers who struck them with the batons and rifle butts.