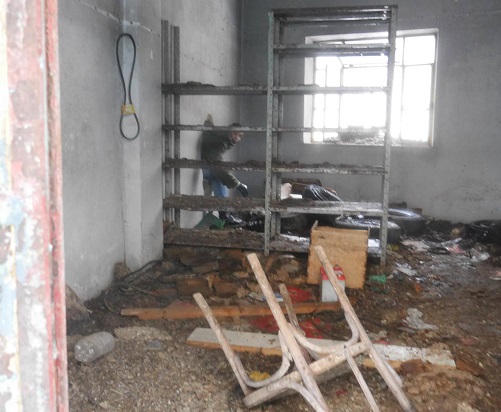 The Youth Against Settlements Coalition in Hebron, in the southern part of the occupied West Bank, has reported that fanatic Israeli settlers broke, on Wednesday, into one of the Palestinian stores, closed by Israel since 2001, and smashed one of its walls to get into other stores.The Youth Coalition said the attack took place in the Shuhada Street, in Tal Romeida neighborhood.

It stated the settlers managed to break into many stores by smashing the walls that connect them, similar to what the Israeli army did in the Jenin refugee camp during the massive invasion of 2002.

Ahmad ‘Amro, a local activist, said that as he and his group were conducted a routine tour in the Shuhada Street and Tal Romeida, they realized that one of the stores had been broken into.

Once they approached the store they found out the smashed interior walls leading to nearby stores.

He said his group formed a Special Operations Room to help the Palestinians cope during the snow storm striking the area, and to ensure they receive basic services, especially since the area is under full Israeli military and security control, therefore other teams and the Palestinian police cannot enter the area.