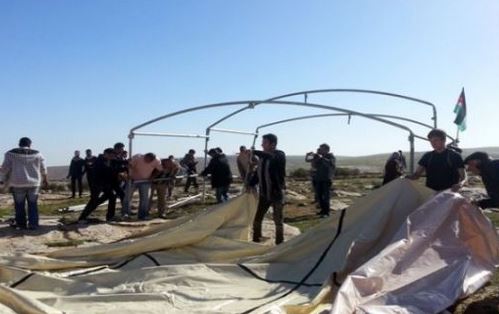 Activists of the Nonviolent Popular Resistance Movement, national and Islamic factions, rebuilt on Wednesday, the “Jerusalem Gate” protest tent village, on Palestinian lands east of Abu Dis town, near occupied Jerusalem.Spokesperson of the Popular Resistance Committees Hani Halabiyya said that dozens of Palestinians, and solidarity activists, re-installed the tents and structures, after the Israeli soldiers stormed the area, earlier on Wednesday at dawn, and removed the protest village.

Halabiyya added that the activists, and their supporters, are sending a direct message to Israel that its occupation, colonial activities and its plans to displace the Bedouins from the area, is illegal and immoral.

He said the Israeli plans aim at removing the indigenous Palestinians, so that it can build and expand its illegal colonies in the area.