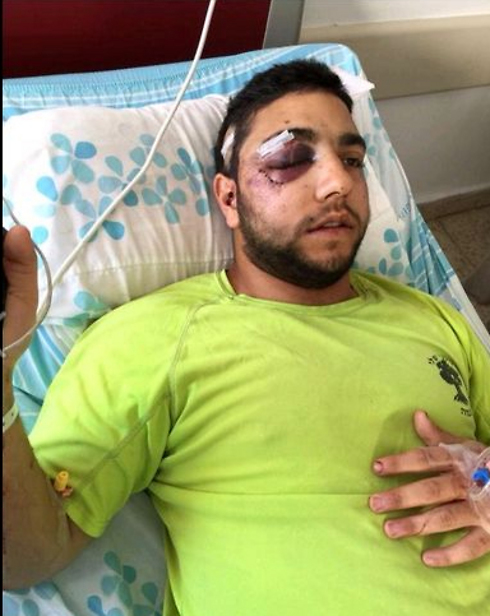 In the second such incident in less than two weeks, an Israeli Druze soldier, who was out of uniform at the time, was beaten badly by Jewish soldiers in a hate crime Saturday night, based on the fact that he was speaking in Arabic.Even though Arabic is one of the official languages (along with Hebrew) of Israel, those who speak Arabic in public, or carry anything with Arabic writing on it, are subjected to a high level of scrutiny by soldiers, police, and security guards, who are all trained to engage in racial profiling of Arabic-speaking people in Israel.

In addition, a growing number of incidents have taken place in the past year of Jewish Israeli mobs attacking civilians for speaking Arabic, wearing hijabs or otherwise ‘looking like an Arab.’

In the most recent attack, Razi Khasisi, an Israeli Druze who is a soldier in the elite ‘Golani Brigade’ of the Israeli military, was taking part in a ‘soldier’s night’ event at a nightclub, when he was approached while speaking with his cousin.

He was speaking in Arabic, his native tongue, and was targeted for that reason by a group of Jewish Israeli soldiers, who called him ‘Arab’ and shouted at the men, ‘You are not wanted here!” Khaisisi tried to explain that he was a soldier too, but was kicked out by the club owner.

When he and his cousin went out to their car, the mob of angry soldiers followed them, with one throwing a rock through the windshield that broke Razi’s jaw – they tried to pull him out and punched and hit him, according to eyewitnesses.

His cousin Amir, who managed to escape serious injury, told the Israeli paper Yedioth Ahranoth, ‘“The insult is worse than the physical pain. He is so proud of his unit and of his service. He loves his country. You can see it in his Facebook profile, everything he writes is either in favor of his country or his unit. I just don’t believe something like this can happen. But this just shows that it’s not a matter of patriotism or the [Israeli military], it’s a matter of being allowed to speak your language unhindered. It is unconceivable that in Israel someone will be attacked just for speaking Arabic in public. We are horrified. Our parents don’t know what to do with themselves and the family is in shock.’

The Druze community is an Arabic-speaking minority that is religiously and culturally distinct from Palestinian Muslims and Christians. The Druze pride themselves on integrating into the societies where they live, and accepting the political power of the government. Calling themselves ‘the Unitarians’, their religion is based on a version of Shi’a Islam, but incorporating parts of other Abrahamic faiths to create a distinct theology. The Druze can be found in Israel, Lebanon, Syria and Jordan.

While members of the Druze community have traditionally served in the Israeli military, acting as spies or trackers as well as infantry combat soldiers, a growing number of Druze youth have refused to serve. In a poll conducted in Israel last year, 47 per cent of Druze said that there is no difference between them and other Arabs, while 27 per cent claimed that their situation is worse than the Arabs in Israel. Moreover, 83 per cent said that their life is worse than the Jews in Israel despite their military service.

Saturday’s attack followed another, similar incident on January 24th, in which a Druze soldier, Toomy Hassoun, was beaten by ten Jewish Israelis for speaking Arabic in public. Both Hassoun and the victim of the more recent attack, Razi Khaisisi, hail from the Druze town of Daliat al-Karmel.

Palestinians and Druze living inside Israel have pointed out that these attacks have a chilling effect on their culture, making them whisper to each other or keep their children inside, rather than have them ‘caught’ speaking Arabic in public.

Dozens of attacks have taken place against Arabic-speaking civilians in Israel in the past year, some of which have been attributed to the ‘Lehava’ anti-assimilation group, whose stated aim is to “save the Jewish women of Israel (daughters of Israel)” by trying to prevent marriages of Jewish women to non-Jews, especially Arabs. It aligns itself with the Kach terrorist group.