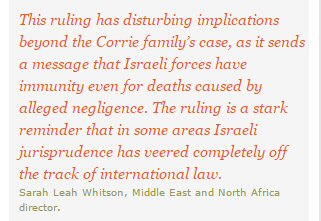 (Jerusalem, February 17, 2015) – The Israeli Supreme Court ruling in a suit seeking damages over Rachel Corrie’s death sends a dangerous message to Israeli armed forces that they can escape accountability for wrongful actions, Human Rights Watch said today. Israel’s Supreme Court on February 12, 2015, exempted the Israeli defense ministry from liability for actions by its forces that it deemed to be “wartime activity,” but wrongly refused to assess whether those actions violated applicable laws of armed conflict, Human Rights Watch said.Corrie, 23, was killed on March 16, 2003, while attempting to prevent an armored Israeli bulldozer from demolishing the home of a Palestinian family near Rafah, in the southern Gaza Strip. She and other foreign nationals, wearing bright orange vests and using megaphones, shouted at and stood in front of bulldozers over the course of several hours to prevent them from destroying homes. Corrie climbed to the top of a mound of earth created by the front blade of a bulldozer, which continued forward, crushing her. The bulldozer operator claimed he didn’t see her.

“This ruling has disturbing implications beyond the Corrie family’s case, as it sends a message that Israeli forces have immunity even for deaths caused by alleged negligence,” said Sarah Leah Whitson, Middle East and North Africa director. “The ruling is a stark reminder that in some areas Israeli jurisprudence has veered completely off the track of international law.”

The ruling came in a case brought by Corrie’s family. The court president, Miriam Naor, joined by Justices Esther Hayot and Zvi Zilbertal, explicitly refused to apply international humanitarian law – the laws of war – or international human rights law to Corrie’s case. Under Israeli jurisprudence, the ruling stated, “the rule is well known that an ‘explicit statutory provision of the Knesset overrides the provisions of international law’.” Because the provisions of Israeli law were “clear” that in this case the state had immunity from tort liability, the court ruled, “there is no place to require the state to provide compensation under international law.”

The court based its ruling on an Israeli law in force at the time of Corrie’s death that exempted Israel from liability for any act by its forces carried out during “wartime activity.” The Civil Wrongs (Liability of the State) Law, as amended in 2002, defined wartime activity as “any action combating terror or insurrection,” or “intended to prevent terror and hostile acts and insurrection, committed in circumstances of danger to life or limb.”

The court accepted the military’s claims that its forces killed Corrie while conducting “clearing” operations to uncover tunnels used by Palestinian armed groups in the area, and had come under fire from armed groups repeatedly during similar operations. Because Corrie was killed at “the scene of ongoing fighting between the IDF [Israel Defense Forces] and terrorist organizations,” Israel is immune to liability “even if we accept the argument that the forces were not in danger from Rachel and her organization,” the ruling said.

Moreover, the law that the Supreme Court ruling upheld fails to distinguish between conduct of hostilities and law enforcement actions during armed conflict and occupation. In the context of military occupation, actions by Israeli forces are judged according to both the laws of armed conflict and international human rights law standards.

Israeli forces testified at earlier hearings before a lower court in Haifa that Palestinian armed groups had fired at them “every day” during the course of their “clearing operations” in Rafah, but provided no evidence that any shots were fired at the time of Corrie’s death or during the two hours preceding it. The only relevant evidence the military submitted was a military log that recorded that a grenade had been thrown, without further information. The military argued in court that Palestinians threw a grenade at Israeli forces, but witnesses called by Corrie’s lawyer testified that the only grenade they observed that day was a smoke grenade thrown at them by Israeli forces.

The Supreme Court ruling, which upheld a 2012 ruling by the Haifa District Court, also dismissed the Corrie family’s petition for compensation for the harm caused to them by what they considered to be negligent investigations by the military into Corrie’s death. The Supreme Court said the Corries could not prove the damage caused to them by any possible faults in the investigation.

The Israeli military opened an “operational debriefing” and a criminal inquiry into Corrie’s death. Both concluded that the facts cleared Israeli forces of any wrongdoing.

Human Rights Watch documented that Israeli investigators failed to call any Palestinian witnesses, threatened to indict other foreign volunteers who witnessed Corrie’s death while questioning them about the incident, and failed even to ask witnesses to draw a map of the area at the time of the incident. The initial military inquiry into her death even concluded that “no signs substantiate [the] assertion that Ms. Corrie was run over by a bulldozer,” a conclusion that the military later reversed.

Human Rights Watch documented that from 2000 to 2004, Israeli forces in Rafah destroyed the homes of 16,000 Palestinians to clear a “buffer zone” along the Egyptian border. The military claimed its actions were intended to prevent the use of tunnels by Palestinian armed groups for military purposes, but the “pattern of destruction strongly suggests that Israeli forces demolished homes wholesale, regardless of whether they posed a specific threat, in violation of international law,” in most cases without military necessity, Human Rights Watch concluded. (Egypt has more recently carried out mass demolitions of homes on its side of the Rafah border, which Human Rights Watch is investigating. Egypt is blocking media access to the area.) Human Rights Watch’s findings raise the question, which the Supreme Court did not examine, of whether the operation that the bulldozer operator was participating in when it crushed Corrie can be considered a lawful military action.

Since Corrie’s death, Israel has broadened the immunity to tort liability for wrongs committed by its armed forces. A July 2013 amendment to the Civil Wrongs law redefined the definition of “wartime actions” for which the state was immune from damages to include any actions by Israeli forces in the Gaza Strip – “whether or not,” according to the law’s explanatory notes, “they were carried out in circumstances of danger to life or limb.” Israel commonly refuses to grant witnesses and victims from Gaza permission to enter Israel to participate in court hearings, claiming they may present security threats, and courts have required each Palestinian plaintiff in damages cases to pay prohibitively expensive “court guarantees” of up to 20,000 shekels (US $5,140) before accepting the case.

Human Rights Watch observed two of the Haifa court hearings and the arguments in the case before the Supreme Court.

The Court judgment, while dismissing the claims against the Israeli Defense Ministry regarding Corrie’s death (case 6982/12), upheld a different appeal by Corrie’s family (case 6968/12) regarding what it called the Israeli forensic authorities’ “inappropriate” actions during Corrie’s autopsy and demanding the repatriation to the US of all her remains, some of which remain in Israel. The court rejected a decision by the Nazareth district court on that issue and ordered the Nazareth magistrate’s court to re-examine the family’s claims.

“Israel’s impunity laws slam the door on civilian victims in Gaza, and look like further evidence that Israel is not genuinely willing to hold its own forces accountable for serious violations,” Whitson said.

See also: ‘From the Diary of Rachel Corrie’ (w/video.)