US Pressuring France to Postpone UN Resolution on Palestine? 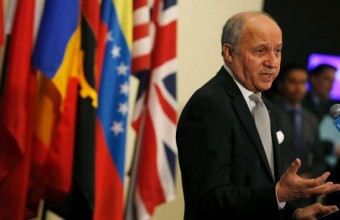 Israeli newspaper ‘Haaretz’ has published a report saying that the United States and several other countries – including Arab states – have asked the French government, over the past two weeks, to postpone its initiative for a United Nations Security Council draft resolution on the Israeli-Palestinian issue – at least until after the June 30th deadline for reaching a comprehensive nuclear agreement with Iran.According to Haaretz, Senior US officials and European diplomats told the newspaper that the message was also relayed to French Foreign Minister Laurent Fabius, as well as to French diplomats at the UN headquarters in New York and to officials in Washington and in other capitals. Foreign Policy was the first to report on Wednesday regarding the American messages to France.

PNN further reports that, according to the American and European diplomats, the messages relayed to the French stressed that the Obama administration – as well as other powers – are currently focused on reaching a comprehensive agreements with Iran. Taking action on the Israeli-Palestinian issue, they said, would only distract from and disrupt this goal.

A senior American official said that the administration is also worried that such a move by France would harm efforts to win the support for the Iran deal from Democratic congressmen and senators. He added that Israeli opposition to negotiations with Iran is already hindering the efforts to win support in Congress; therefore, there is no need for a Security Council showdown over another issue which Israel views as harmful to its interests.

French diplomats met over the past two weeks, with representatives of various Arab states, and presented a first draft of a resolution they wish to submit to the UN Security Council on the Israeli-Palestinian conflict. The diplomats were surprised by the position taken by some Arab states; their representatives requested that the move be postponed, on the grounds that the timing is inappropriate.

French Foreign Minister Fabius implicitly hinted at American reservations from the move in an interview, last week, with the Financial Times. ‘We need to agree on timing with [US Secretary of State] John Kerry,’ he said. ‘There are other issues to deal with. One negotiation should not hurt another, but at the same time, there’s always a lot going on, so the risk is we never find time.’

A few weeks ago, France announced that it was interested in renewing the initiative to advance a resolution on the Israeli-Palestinian issue at the UN Security Council. The French already tried to advance the move a few months ago, but failed due to a Palestinian refusal to accept the proposal drafted in Paris.

The Palestinians pushed through a much more extreme proposal, but did not succeed in winning nine out of 15 Security Council member votes needed. Because of this, the US did not have to use its veto power.

According to the French initiative, the draft UN proposal would include principles for resolving the conflict, such as establishing the borders of the Palestinian state based on the 1967 lines with land swaps, making Jerusalem the capital of both Israel and Palestine, setting a timeline for ending the occupation and holding an international peace conference.

Palestine and the Injustice of the World Community