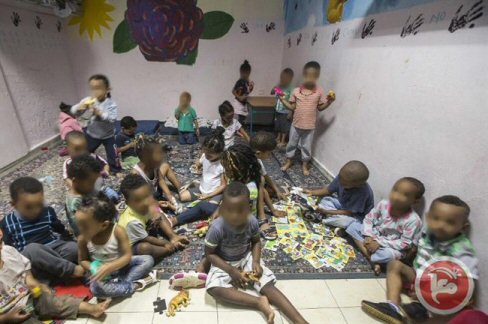 It is nap-time at Felizia’s daycare center, a squalid street-level flat in Tel Aviv where loud pop music drowns out the miserable cries of dozens of children and babies cooped up inside.Run by a corpulent Ghanaian woman, it is one of dozens of unlicensed establishments which have sprouted up across Israel’s commercial capital offering an ‘affordable’ child-minding service to thousands of illegal African immigrants who have to go to work.

Characterized by filth and squalor, they have been uniformly denounced by both rights groups and the media as ‘baby warehouses.’

So far this year, five babies — all only several months old — have died in these so-called daycare centers.
And dozens more have died over the course of the years, either through negligence or a lack of adequate care, according to rights groups working to help African asylum seekers.

Although such child-minding facilities are not technically illegal and are often well-known locally, they are not supervised by the authorities.

The authorities do not close them down because they are the only affordable option for many immigrants who have to work, said Maya Peleg, director of Unitaf.

Her organization also offers affordable day care to children from the migrant and refugee community but does not have enough centers to meet demand.

And if the local council was to begin shutting the unlicensed establishments down, others would simply spring up in their place within days, so heavy is the demand.

‘These places are first and foremost a business for the women who run them, who mostly come from West Africa,’ said Peleg, whose organization is funded by Tel Aviv city council.

UN figures show Israel is home to about 53,000 African refugees and asylum seekers, most of whom entered the country illegally through the border with Egypt. Among them, 36,000 are from Eritrea and 14,000 are from Sudan.

For them, Israel is the only country with a high standard of living which is accessible on foot.
Israel does not want them to stay and only rarely grants political asylum, leaving the vast majority of them in legal limbo, left to fend for themselves on the margins of society.

Most cannot afford to pay for licensed day care, whether at a nursery or a child-minder’s home, which costs around $655 a month — a vast sum for those barely scraping by on wages well below the legal minimum.
By comparison, these ‘babysitters’ charge only about $153.

‘Their goal is to work as many hours as possible, to look after the maximum number of children with the fewest number of people and spending as little as possible on food and equipment,’ said Peleg.

Tel Aviv alone has around 80 of these child-minding facilities which cater to some 3,000 children under the age of three, she said.

At Felizia’s, dirty feeding bottles lie in the sinks, while school satchels and plastic bags stuffed with toys clutter the entrance.

About a dozen babies, many of them crying, cling to the bars of their cots without drawing the slightest attention from Felizia or her young helper, who is also from Ghana.

A pungent smell of dirty nappies fills the room, which is about 10 square meters, where another dozen or so toddlers are huddled on the floor, their eyes glued to a television set.

In a second room of similar size, about 20 children aged between six and nine are seated in front of another television.

Peleg said the biggest worry is about the plight of the younger children, who sometimes stay in their cots all day.

‘The number of adults is totally inadequate to feed each child individually. They are sometimes propped up against a pillow with a bottle attached to their neck,’ she explained.

‘That is how one of the babies recently died, choking.’

Yael Meir, a researcher in psychology at Tel Aviv University who co-authored a study on the impact of such ‘baby factories,’ said that staying at such places can affect a child’s development.

‘The lack of stimulation affects their development at all levels — motor, social, cognitive, emotional. These handicaps emerge when they begin to attend school and they often have to be placed in special education structures,’ she said.

Following the deaths of the five infants earlier this year, the government decided to allocate $14 million over four years for the construction of day-care centers modeled on those run by Unitaf.
‘This is a significant amount, but the real test will be whether the money will build enough nurseries to permanently close down the ‘babysitters’,’ said Peleg.

See IMEMC Report: The Plight of Africa’s Exiles in Israel