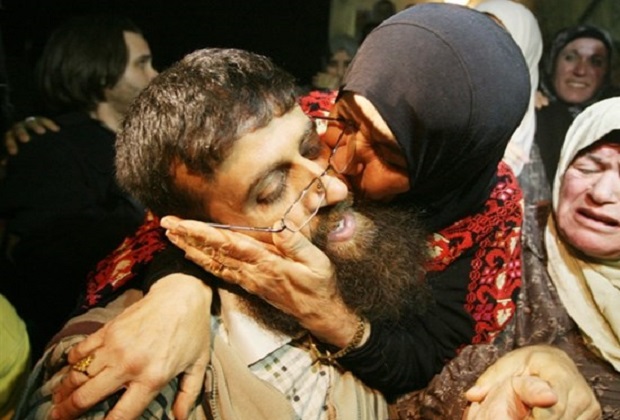 The family of 37-year-old detainee Khader Adnan, who has been on hunger strike for the 45 days in a row, recently stated that Adnan refused to undergo medical tests by Physicians for Human Rights (PHR) delegation, because of administrative restrictions that Adnan’s hands and feet are chained to his bed for 24 hours, during the tests.According to the PNN, the family statement said that Khader refused to undergo the examinations in chains, since it contradicts the international law which guarantees the ease and freedom such associations must obtain during similar activities.

The message from Adnan’s refusal, read the statement, was that if Israel strips associations such as PHR and the Red Cross from their powers, any delegation will have no function but being a “make up layer” on the face of the Israeli Prison Service (IPS).

The family demanded international human rights organizations, including PHR, Red Cross and Amnesty to play their role in retaining the rights of prisoners and pressuring Israeli authorities to treat them humanely and remove the chains from his hands and feet.

They added that no visits from any firms will be accepted unless it was fully legal and binding to human rights conventions.

After Adnan’s hunger strike entered its 2nd month, two weeks ago, his condition became critical and he began experiencing intermittent comas, a sharp decrease in his weight and a drop in his heart rate.

Sheikh Adnan was kidnapped on July 8, 2014, and has since been held under Administrative Detention orders without charges or trial. He went on hunger strike for a week in January of this year after Israel renewed his administrative detention orders for the third consecutive time.

The strike comes in protest of this administrative detention, under which detainees are held indefinitely without charge or trial, as Israel has detained thousands of Palestinians over the years, by this procedure and for periods ranging from several months to several years. The highest number of administrative detainees was during the first Intifada in 1989, when the number reached 2,000 prisoners.

Two years ago, Adnan held a 66-day hunger strike, also protesting his administrative detention, and only ended his strike after Israel agreed to release him in 2012.