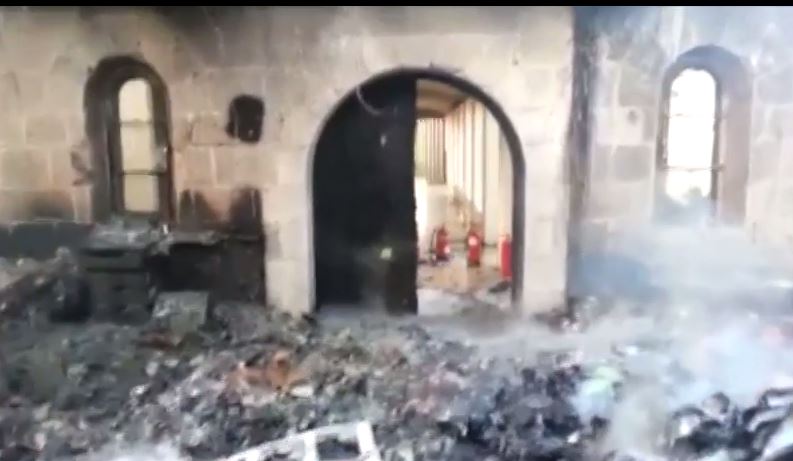 Dr. Hanan Ashrawi, member of the Executive Committee of the Palestine Liberation Organization (PLO), strongly denounced the burning of an historic church, in Tabgha, on the northwest shore of the Sea of Galilee, and said there is a significant increase of organized hate crimes carried out by Jewish fanatics against both Christian and Islamic holy sites in Palestine.She added that such attacks are taking place under the protection, and direction, of the fanatic Israeli government, that fails to seriously investigate the dozens of assaults against holy sites in occupied Palestine.

“This is an outcome of racist ideologies, and constant incitement, as well as the discriminatory laws of Israel,” Dr. Ashrawi said, “This is yet another example how Israelis act with impunity, without fearing any legal prosecution.”

The Palestinian official also said that the fanatic right-wing coalition of the Israeli government, and various religions and political organizations in Israel, are encouraging a racist type of ideology in Israel, particularly among the settlers who are illegally living in occupied Palestine.

She noted that the Israeli government officials are providing the settlers with legal, financial and political immunity.

Dr. Ashrawi added that the attack on the historic Church of the Multiplication of Loaves and Fishes is an outcome of the racist policies of Israel’s government, particularly the fanatic right wing coalition of the government of Benjamin Netanyahu.

“Those racist attacks are an outcome of a fanatic Israeli ideology of occupation based on racism and incitement,” Ashrawi said, “They are a clear expression of the true nature of the Israeli occupation of Palestine, its ongoing violations and atrocities, and proof that Israel continues to act as a state above International Law, and legal prosecution.”

“Those are policies of hatred sponsored and encouraged by Israel’s occupation, and the parties of the fanatic right-wing coalition,” she stated, “Such policies encourage fanatics and extremists by providing them with legal, political and financial support.”

The Palestinian official called on the International Community to oblige Israel to stop all types of racism and oppression, to stop nurturing the fanatic extremist groups, and to end its occupation of Palestine, as well as respecting the rights of the Palestinian people wherever they reside.

The Head of the Order of Saint Benedict, Father Gregory Collins, said the historic church would be closed for at least the next three days due to the huge damage caused by the fire.

The Israeli Police said they had apprehended sixteen young Israeli colonialist settlers in connection with the crime.

The sixteen are Jewish seminary students in illegal Israeli colonies in the occupied West Bank. But they were released later the same day “due to lack of evidence.”