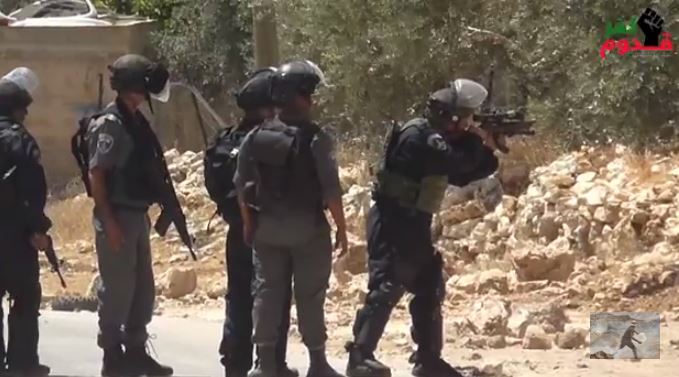 As Hundreds peacefully marched, Friday, in Kufur Qaddoum village, near the northern West Bank city of Qalqilia, chanting against the illegal occupation and its ongoing violations, Israeli soldiers attacked the protesters, wounding two Palestinians with live rounds, and one with a rubber-coated metal bullet, while many suffered effects of tear gas inhalation.The Popular Committee against the Wall and Settlements in Kufur Qaddoum said, for the first time, the protesters actually managed to reach the Iron Gate, blocking the main entrance of the village.

It added that the soldiers then started spraying them with toxic water mixed with chemicals, referred to as “skunk water.” The army also fired rounds of live ammunition, rubber-coated metal bullets and gas bombs.

The Committee said resident Sari Sami was injured by two live rounds in the leg, Basham Mohammad, one live round in the leg, while Mohammad Yacoub was shot with a rubber-coated metal bullet before falling onto the ground, causing a fracture in his leg.

This Friday is also the first Friday in the holy Muslim month of Ramadan; hundreds of Palestinians, accompanied by Israeli and international supporters participated in the protest.

After the protest, Israeli soldiers fired several gas bombs at a number of homes, causing families to suffer the effects of tear gas inhalation, while small fires broke out in some gardens.

Clashes took place between the soldiers and dozens of local youths who hurled stones and empty bottles on them, while the army fired more gas bombs, rubber-coated metal bullets and live rounds.