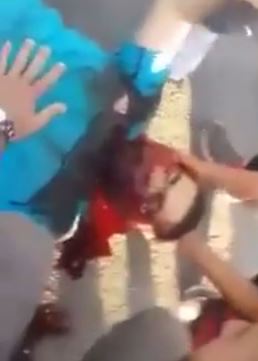 A Palestinian teen was killed, earlier Friday, near the ar-Ram town, north of occupied Jerusalem, after an Israeli commander shot him, as he was climbing the Annexation Wall, in an attempt to reach the Al-Aqsa Mosque for Friday prayers. The attack took place approximately at 7:30 in the morning.The Israeli army alleged that General Yisrael Shomer, the commander of the Binyamin Brigade, was driving in a military jeep, along with other soldiers, when their vehicle “was attacked by stone-throwing Palestinians,” causing damage to the windshield.

The shooter claimed the slain teen was among those who hurled stones on his car.

Eyewitnesses denied the Israeli allegation, and said Mohammad Hani al-Kasba, 17 years of age, was shot while climbing the Annexation Wall, along with dozens of residents, in an attempt to reach the Al-Aqsa Mosque for Friday prayers.

After being shot, the teen fell from a high altitude and slammed onto the ground; the slain Palestinian is from the Qalandia refugee camp, north of occupied Jerusalem.

The eyewitnesses said the military is trying to justify the killing of the teen, who was not involved in any clashes with the military, but was simply trying to reach the Al-Aqsa Mosque, on the third Friday of the Holy Muslim Month of Ramadan.

The soldiers did not allow any person to approach him, and later a Palestinian ambulance arrived at the scene and moved him to the Palestine Medical Center, in Ramallah, where he died of his serious injuries.

Hundreds of Palestinians started protesting, and headed to the Medical Center, to express solidarity with the family, and their anger over the killing of the teen.

Clashes took place, after the shooting, near Qalandia refugee camp, and in every part of occupied East Jerusalem, especially around the Al-Aqsa Mosque compound, and all nearby areas.

It is worth mentioning that the slain teen is the brother of two children, Yasser, 14, and Samer, 15, who were killed by the army in the Qalandia refugee camp, in 2001 and 2002.