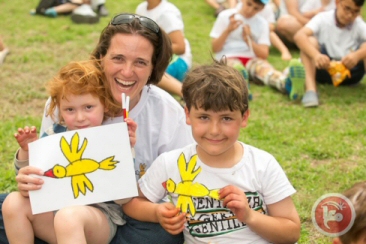 Paper lanterns crafted for Ramadan are hanging over the heads of children as they run between a snack table and a cartoon playing on the television.On first glance, this could be any other kindergarten in the city of Jaffa, where over a third of the population are Palestinians. But unlike most preschools in Israel, every sign on the wall, including the names of the children, is written in both Hebrew and Arabic.

This is one of a mere five mixed schools and preschools across all of Israel, established by Hand In Hand, an organization promoting mixed Jewish and Palestinian education in Israel.

Created in 1998, the organization now counts 1,400 students, and is opening its sixth kindergarten this fall. Half the students are Jewish while the other half are Palestinians living in Israel.

Here in Jaffa, the kindergarten was the project of a group of parents that wanted a better future both for their children and for the community at large.

One of the fathers, a Jewish-Israeli, has come to pick up his daughter to take her home. The girl runs to him showing a picture she has drawn that day, before returning to play with her friends for another few minutes.
“She invited Kareem (a Palestinian boy) to come to visit our home,” the father says proudly.

An exception to separation

Although Palestinians living in Israel account for almost 21 percent of the population, Palestinians and Jews study separately until the end of high school. While Jewish Israelis can choose between religious and secular schools, all-Palestinian schools are usually the only option for Palestinians.

“It is a very familiar situation that Arabs and Jews grow up in the same town not meeting the other side until the age of 18, when they enter universities or the job market,” says Mohamed Marzouk, head of the community department at Hand In Hand.

All the association’s schools are bilingual, as language is seen as key to learning about other cultures. In the kindergarten, this means signing songs and listening to stories in both Arabic and Hebrew. There are always two teachers present, one communicating in each language.

Dafna Kaplan, one of the Jewish members of the parents’ committee in Jaffa, estimates that her four-year-old daughter already understands the majority of what she is told in Arabic. A long-time peace activist, the mother is now following her daughter’s footsteps and trying to learn Arabic herself.

“When we talk to the Arab sellers here in Jaffa, I can see how happy they are to see my daughter speaking Arabic — some even come to kiss her,” Kaplan says.

But the students at Hand in Hand represent only a fraction of Israeli society. According to Kaplan, about 150 children had to be refused admittance to the Jaffa kindergarten for lack of space. Marzouk estimates that all the mixed schools have a queue of students hoping to get registered.

Some of the Palestinian parents in Jaffa chose the mixed school in the hope of a better education system, as all-Palestinian schools suffer under-investment from the Israeli state.

According to a report from Adalah, an Israeli group promoting Palestinian rights in Israel, the state in 2004 allocated three times more funding to Jewish students than to Palestinians. For Palestinian schools, this means crowded classrooms, poor facilities, and fewer hours of teaching per student.

Even so, some believe that separate schools are the only way to preserve the Arabic language.
“It is a separation that the Arabs are not rejecting. What would we do if everything was taught in Hebrew?” says Sawsan Zaher, director of Social and Economic Rights Unit at Adalah. “It is also a way to employ Arab teachers.”

For the Jewish children, mixed schools offer a rare opportunity to study Arabic from an early age, while all Palestinians living in Israel start Hebrew lessons in the second grade. But Marzouk thinks that having Hebrew-speaking classmates makes a big difference for the Palestinian students.

“In all-Arab schools, we learn Hebrew only technically, as we don’t learn about the Jewish culture and traditions that come with it,” he says.

Recognized as part of the official education system, Hand In Hand institutions follow the national curriculum. But during extra classes, the students learn about the three monotheistic religions: Judaism, Christianity, and Islam. At the kindergarten in Jaffa, for example, the children have days off for all the religious holidays.
While most of the Jewish students at mixed schools come from families from the political left, Marzouk says there are some “surprising” cases of religious families and even right-wing supporters.
“What unites them is that they are all open to the idea of living together,” he says.

In all-Palestinian schools in Israel, lessons about Palestinian culture are largely missing. Instead, preserving the Jewish nature of the state of Israel is legally defined as the primary objective of the education system, according to Adalah.

Although the needs of the Palestinian minority ought to be “acknowledged”, the rights group says few Palestinians in Israel are involved in designing the national curriculum, which is entirely controlled by the Israeli Ministry of Education.

“The schools teach only the Jewish narrative of history,” Zaher says.

Hand In Hand’s mixed schools are trying to change this. At high school, for example, students are also taught the Palestinian version of what happened in 1948. For Israelis, the year marks independence, while Palestinians commemorate it as the “Nakba”, or catastrophe, which led to the loss of their lands and the expulsion of hundreds of thousands of refugees.

According to Marzouk, the Israeli state does not forbid the teaching of Nakba, although it is widely understood as a “non-recommended” subject among the principals of regular Palestinian schools. As a result, the vast majority of Palestinians are not learning their own history.

A different approach has sometimes led Hand in Hand’s schools into trouble. On Israel’s Independence Day, for instance, the Tel Aviv municipality criticized the kindergarten in Jaffa for not raising the Israeli flag.

Last November, two classrooms of the school in Jerusalem were set on fire and anti-Arab graffiti was sprayed on the walls.

A more long-term struggle is in finding enough financing for the schools to operate. As only 30 percent of the funding comes from the Israeli state, the rest has to be covered by tuition fees and private donations.

“Every year, we need to start reassuring our existence,” Marzouk says. “It is not easy.”

In Jaffa, the kindergarten has been fighting to get new space for the increasing number of classes. According to Kaplan, local authorities have always granted a new location at the last minute — despite the fact that several buildings stand empty nearby.

So far, only one mixed school in Jerusalem covers grades until the end of high school. As there is no all-Palestinian university in Israel, students from the Palestinian community often find it harder than their Jewish counterparts to enter higher education.

A 2013 report by Mossawa, an advocacy center for Palestinian citizens of Israel, states that only 10 percent of those obtaining a Bachelor’s degree are Palestinian. No Israeli university offers teaching in Arabic, forcing Arabic-speaking students to choose from a few programs at colleges or look into studying abroad.

Mostly exempted from the Israeli military service, Palestinian students are also not eligible for financial assistance given to those who have served in the army.

“Some courses in psychology and medicine, for example, have age restrictions that make them available only for those who have finished their service,” Zaher says.

A model for the future

In the long run, lower investment in the education of Palestinian children living in Israel will decrease the economic potential of the whole country, Adalah estimates.

“Education is the first step to a better quality of life. This under-investment will affect the Arab population for generations to come,” Zaher says.

“I am not naive to think that even 20 mixed schools would change such a long conflict,“ Marzouk says. “But I know that this is the model of the future: knowing the history and culture of the other.”

Kaplan, the mother of two from Jaffa, sees mixed schools as the only way to reach mutual understanding — even under rocket fire from the Gaza Strip.

“When the summer started, my daughter asked me if a new war was coming. For her, summer equaled war,” Kaplan says.

“This school is the only hope we have.’