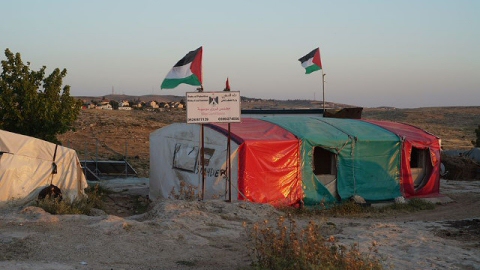 A group of 21 Members of the European Parliament sent an urgent letter to the EU diplomacy chief Federica Mogherini concerning Israel’s plan to demolish the Palestinian village of Khirbet Susiya.Khirbet Susiya has been under imminent threat of demolition from Israel since May, when the Israeli High Court approved the demolition of the villagers’ homes and tents and possible relocation of the villages around 300 Bedouin residents.

“There are approximately 340 men, women and children in the village and 80 buildings of Susiya all of which have demolition orders pending against them. 37 of the buildings are to be demolished imminently, including homes, 22 of which are EU funded, including a medical clinic that is subsidized by the Italian government. The Israeli Court has refused to grant an interim order freezing the implementation of the demolition until the court hears the discussion on the appeal to authorise the village. This situation is unacceptable” – the MEPs say.

The letter was initiated by MEP Martina Anderson – chief of the Delegation for Relations with the Palestinian Legislative Council at the European Parliament.

“Many of the occupants of the Palestinian village of Susiya are from families expelled from the original site of the village in 1986 to make way for an Israeli archeological park, run by settlers who had established the rival Jewish settlement of Susiya three years earlier” – a group of MEPs explain.

“In the face of such ongoing violations of Palestinian’s human rights we call on you to suspend the EU Association Agreement with Israel. The Agreement is based on mutual respect for human rights and democratic principles, as explicitly stated in article 2 of the Agreement. However the ongoing authorisation of the demolition of Palestinian homes by the Israeli government, as well as several human rights abuses, are in breach of Israel’s commitments under article 2 of the Agreement. The EU cannot continue to tolerate such actions by Israel.” – the MEPs argue.

In addition Palestinian and Israeli organisations are calling on the EU not to let Israeli settlements gain from plunder and restrict the sale of all Israeli settlement products in Europe. In particular to bar the importation of Carmel Wines as some of the grapes grown by settlers in Susiya have been documented going to the Carmel Winerygoing to the Carmel Winery, which sells its products in Europe.

Here you can find the list of other corporations profiting from the theft of Susiya land.