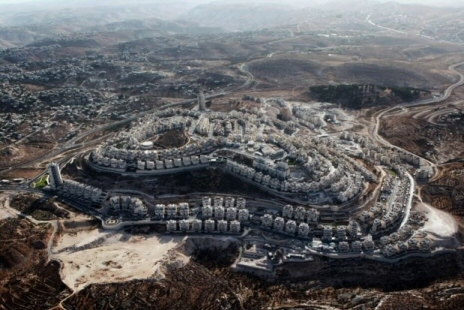 According to Ma’an News Agency, approved plans included legalizing 228 already existing housing units that have been completed in settlements, as well as 541 new housing units yet to be constructed.

An infrastructure plan connecting 296 housing units was also given the go ahead.

One of the plans passed by the administration will begin construction of 24 housing units, in two new buildings, at the Bet El settlement near the West Bank town of Ramallah.

Commonly known as the ‘Dreinoff buildings,’ the two new buildings will join others built on private Palestinian lands that are supposed to be demolished by the end of this month after a ruling by the Supreme Court, Peace Now said.

‘Following yesterday’s approval of the plan, the State is expected to request the Supreme Court to reverse its ruling,’ the group added.

The right-wing government pieced together by Israeli PM Benjamin Netanyahu in March is largely comprised of MK’s that promote rapid settlement expansion throughout occupied East Jerusalem and the West Bank, and publicly oppose an independent Palestinian state.

In an ongoing trend, pro-settlement groups have yielded substantial power from the government. Peace Now reported that ‘in recent weeks settler groups have put heavy pressure on the government, including numerous demonstrations throughout the West Bank, not to demolish the buildings.’

Over the last two decades, Jewish settlements have expanded throughout the West Bank and have made the potential for a contiguous Palestinian state near-impossible if they remain.

The Israeli government provides separate system of infrastructure for those living in the Jewish-only settlements, connecting over 500,000 settlers to roads, electricity, water, and sewage systems that remain inaccessible to neighboring Palestinians.

While settler groups ‘lobbied furiously’ last year for the two roads, then-Minister of Finance, Yair Lapid reportedly rejected the demands on the grounds that their construction would be too expensive.

‘Now, with the new government at place, the approval for the roads has been granted,’ Peace Now said.