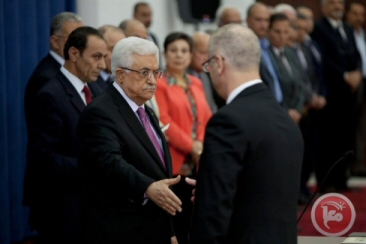 The new ministers will be sworn-in on Friday after prayers in the Palestinian Presidential headquarters in Ramallah.

There had been talk of a reshuffle for months, but in mid-June it was announced at a Fateh council meeting that the entire government would soon be dissolved.

The reshuffle is reportedly an attempt to preserve and reform the body, instead of dismantling it.

The unity government was formed in June 2014 in a bid to end division between the Fateh-led PLO and Hamas, but has so far been unsuccessful in doing so.

The Hamas movement said Thursday that it disapproved of the unity government’s reshuffle and called the move “unconstitutional and outside consensus.”

Hamas spokesperson, Sami Abu Zuhri, added that the reshuffle represents a coup on the unity deal and said that the PA has become a separatist government.

Officials told Ma’an in June that Prime Minister Rami Hamdallah’s resignation was an imminent part of the reshuffle, but it has yet to officially materialize.

Hamdallah also serves as the Minister of Interior.

The other 19 ministry positions have remained unchanged. Currently, four ministers hold positions as heads of up to three different ministries.

Attempts for reform came after the unity government formed in June last year repeatedly failed to overcome divisive issues between Fateh and Hamas.

Power has remained divided between the Hamas-led Gaza Strip and Fateh-dominated West Bank since 2007.