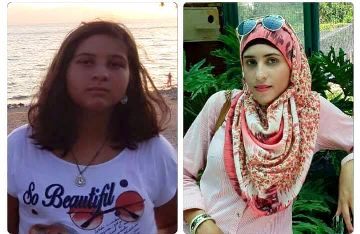 Update:
After the family was unable to locate the missing girls, they contacted the Israeli police. The police told the family that the girls had been arrested and were in custody. The police had made no effort to contact the family in the 12 hours they had been in custody. The girls were held at al-Qashla Interrogation Centre in Jerusalem. The two sisters were not charged with any crime, but police refused to release them.

After a crowd gathered outside the police station chanting for their release, the Israeli police eventually released them.

Residents and family members are looking for the two girls and issued statements on social media networks calling for help in the search effort.

The family fears the worse that the two teenagers have been kidnapped by Israeli radical settlers group.

The family said that their search effort is being delayed by Israeli imposed restrictions on the movement of Palestinians in Jerusalem.

According to local media sources the father of Abeer and Wafa’ suffered a nervous breakdown and had to be moved to hospital for treatment.

Meanwhile their mother was called in for questioning by the Israeli police.

Abu Khdier was later beaten and burnt while still alive. The Israeli police did not look for the settlers who kidnapped Abu Khdeir even though the family gave the police a copy of a video from a private security camera showing the settlers and their car.

Just few days after Abu Khdier death, his cousin, an American-Palestinian 15-year old, was beaten up by Israeli soldiers. The attack was caught on camera.