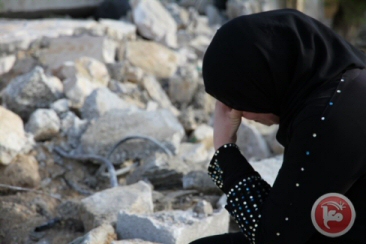 Israeli authorities, overnight Wednesday and during the day on Thursday, executed punitive measures against the families of Palestinians accused of carrying out attacks against Israel, giving four families 72 hours to evacuate their homes before demolition, and raiding the homes of three others.
In the Ramallah area of Silwad, Israeli forces delivered demolition orders to two houses, Thursday, after alleging their sons belonged to a military cell responsible for carrying out an attack near Nablus.
The family of prisoner Abdullah Munir Hammad was given 72 hours to either evacuate their home or file an objection to the military order.

The family told Ma’an News Agency that they don’t actually own the home, and have started legal procedures to reject the order issued on the rental.

Israeli forces also delivered an order to the family of Muath Hamed, who is being held in jail by the Palestinian Authority, also giving them 72 hours to evacuate or object to the order.

The Israeli authorities accused both Muath and Abdullah, along with three others, of carrying out a shooting near Nablus on June 29 that killed an Israeli soldier and injured 3 others.

The same notices were delivered to the family of prisoner Abd Muhammad Abu Shahin from the Qalandiya refugee camp in northern Ramallah after accusing him of leading a military cell that carried out a shooting last Ramadan that killed an Israeli settler and injured another.

Israeli forces also raided the Surda village in northern Ramallah and delivered demolition orders to the family of Muhannad Shafiq al-Halabi, who carried out a stab and shooting attack in Jerusalem killing two Israeli soldiers and injuring four Israelis on Sept. 30.

Thursday’s orders come as Israeli Prime Minister Benjamin Netanyahu has called to fast track the demolition of family homes of alleged attackers, a move criticized as an illegal form of collective punishment due to its displacement of Palestinians who have not committed crimes.

The PM’s orders to carry out punitive home demolitions had led rights groups to repeatedly call on the Israeli government to end the ongoing and daily pressure of the Israeli occupation rather than carry out collective punishment across the occupied area.

Locals told Ma’an that the homes belonged to the families of Mohammad al-Jaabari, Amjad al-Jundi, and Basel Bassam Ragheb Sidr.

Israeli forces also raided the house of detainee Shaher Rayyan, who was accused of carrying a knife and attempting to sneak into an Israeli settlement outpost near Hebron last week.

While the demolition orders issued in the Ramallah area and Hebron raids were carried out in Area A of the occupied West Bank — under full control of the Palestinian Authority — Israel regularly enters the area in violation of international law and the PA does not intervene in such orders.

Families can generally file objections to punitive demolition orders and appeal to Israel’s high court, but Human Rights Watch reported last year that in such appeals, ‘Israel’s High Court of Justice has refused to apply the absolute prohibition in customary international law against the collective punishment of civilians.’