Israeli Forces Kill 5 Palestinians, Including 2 Children, in Less than 12 Hours 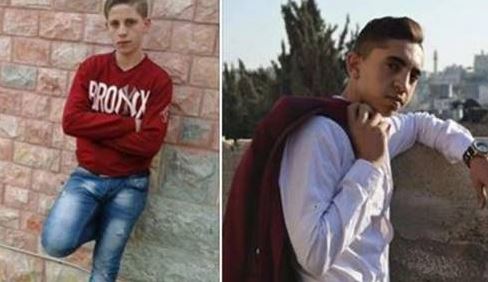 In less than 12 hours, Israeli forces killed four Palestinian civilians, including two children, from Hebron and a fifth in the Gaza Strip.

This escalation coincides with the Israeli arbitrary and coercive measures in occupied East Jerusalem and its suburbs to isolate the Arab neighborhoods in application of a series of the Israeli Cabinet’s decisions.

The Palestinian Center for Human Rights (PCHR) condemns with the strongest terms the Israeli forces’ disregard for the lives of Palestinian civilians, shooting-to-kill policy in suspicion of attempts to stab Israeli soldiers and settlers, and the arbitrary policies applied in occupied Jerusalem.

According to investigations conducted by PCHR regarding the latest Israeli crimes:

· At approximately 08:00 on Tuesday, 20 October 2015, dozens of schoolboys from Beit Awwa village, southwest of Doura, southwest of Hebron, organized a protest heading to the annexation wall, west of the said village.

Due to which, Israeli forces moved into the area through the security iron gate at the wall. The protestors threw stones at Israeli soldiers who chased them and fired tear gas canisters until they reached the Palestinian houses.

At approximately 10:45, while four Israeli soldiers were present between the Palestinian houses, Oday Hesham Mohammed al-Masalma (24) was carrying a bag with olives inside it and walking between the trees.

Oday stabbed one of the soldiers in his arm, but the 3 other soldiers opened fire at him, due to which he fell to the ground and rolled in a dirt downhill.

They went after him and shot him dead. Israeli forces denied paramedics, who arrived in the Palestine Red Crescent Society’s (PRCS) ambulance, access to the wounded for half an hour. Israeli forces then withdrew, while the corpse was taken to Hebron Governmental Hospital.

Following medical examination, it was found out that Oday sustained several bullet wounds to the left leg causing laceration in the blood vessels and a bullet wound to the back left side of the head. According to PCHR’s investigations, Israeli forces could have arrested the aforementioned person after wounding him.

· At approximately 15:00, Israeli forces stationed on the main road, opposite to ‘Gosh Etzion’ settlement, south of Bethlehem, opened fire at a Palestinian civilian vehicle. As a result, the driver Hamza Mousa al-‘Amla (25), from Beit Oula village, west of Hebron, was killed by several bullets.

The corpse was taken by an Israeli military ambulance to an unknown destination. Israeli forces claimed that al-‘Amla had run over 2 settlers on the side of the road.

· In new cold-blooded crime, Israeli forces killed in the evening two children from al-Ja’bari family in the vicinity of ‘Kiryat Arba’ settlement, east of Hebron.

According to PCHR’s investigations and statements of eyewitnesses, at approximately 21:30, dozens of settlers organized a protest heading from ‘Kiryat Arba’ settlement to the Ibrahimi Mosque in Hebron.

While watching the demonstration, the two children stood beside an Israeli soldier, who was around the corner of al-Rajabi building that the Israeli settlers are attempting to seize control over.

The soldier was leaning against the wall and normally talking to the two children when the later asked the soldier to help them to cross via the iron gate, which separates the aforementioned building from where they live.

When the two children heading towards the gate were only two meters away from the soldier, other Israeli soldiers fortified in a military watchtower in the area opened fire at the children and killed them immediately.

The Israeli forces detained the children’s corpses and denied the Palestinian civilians and ambulances access to the area.

In the Gaza Strip, at approximately 16:00, Israeli forces stationed along the border fence with Israel, east of al-Bureij refugee camp, opened fire at a group of Palestinian civilians, who were in an agricultural field that is around 350 meters away from the aforementioned fence.

As a result, Ahmed Sharif al-Sarahi (30) from Deir al-Balah was killed after being hit with 3 bullets to the chest, while two others were wounded.

The Israeli Army Radio reported that the Israeli forces killed a Palestinian sniper and wounded two others.

It should be mentioned that the Israeli warplanes had already targeted al-Sarhi’s house in summer 2014 during the Israeli offensive on the Gaza Strip.

Thus, the number of the killed Palestinian civilians since early October has risen to 47 Palestinians, including 12 children and a woman, in the oPt.

The escalation of committing such crimes coincides with the Israeli arbitrary and coercive measures in occupied Jerusalem and its suburbs.

Following the Israeli Cabinet’s decision to isolate the Arab neighborhoods in response to the ‘attacks’ in the city, the Israeli forces started imposing a cordon on the villages and neighborhoods of occupied East Jerusalem by closing its entrances with cement cubes and establishing checkpoints in addition to erecting iron barriers in the streets and main roads.

All of this is part of the collective punishment policy practiced by Israeli forces against Jerusalemites. Since the aforementioned decision was issued, Israeli forces started to apply the policy of isolating the neighborhoods of the city from each other, and erecting iron barriers and checkpoints in the streets, especially in the Old City and its markets.

PCHR strongly condemns these crimes that prove the increasing number of killings among Palestinian civilians in the oPt in general and occupied East Jerusalem in particular.

Moreover, PCHR stresses that in the above-mentioned cases, Israeli forces could have used less force against the victims or could have arrested and tied them if their allegations were true.

PCHR reiterates its call upon the international community to take immediate and effective actions to put an end to such crimes and reiterates its call for the High Contracting Parties to the Fourth Geneva Convention of 1949 to fulfill their obligations under Article 1; i.e., to respect and to ensure respect for the Convention in all circumstances, and their obligation under Article 146 to prosecute persons alleged to commit grave breaches of the Fourth Geneva Convention.

These grave breaches constitute war crimes under Article 147 of the same Convention and Protocol I Additional to the Geneva Conventions.