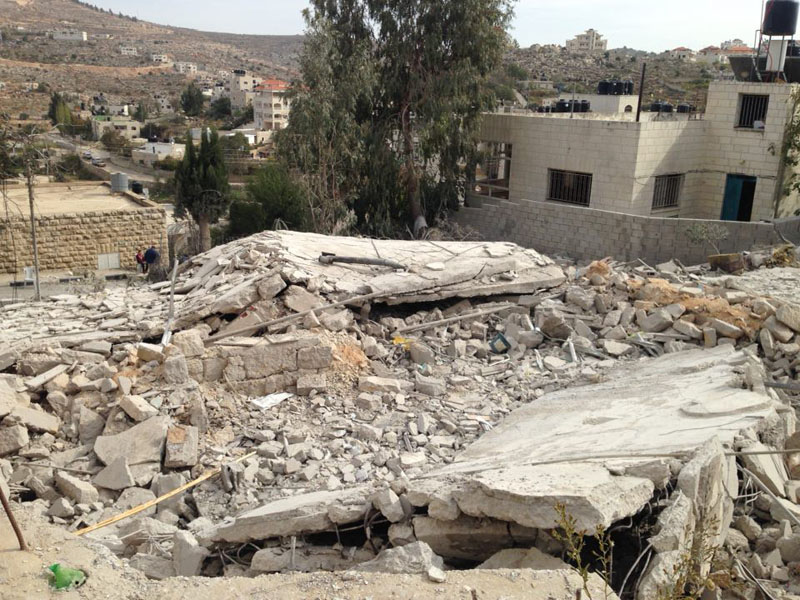 Israeli violations of international law and international humanitarian law in the oPt continued during the reporting period (12 – 18 November 2015).Israeli attacks in the West Bank & Gaza:

Israeli forces have continued to commit crimes, inflicting civilian casualties. They have also continued to use excessive force against Palestinian civilians participating in peaceful protests in the West Bank and Gaza Strip, the majority of whom were youngsters. Occupied East Jerusalem witnessed similar attacks. During the reporting period, Israeli forces killed 7 Palestinian civilians, including a child, in the West Bank. Moreover, 93 Palestinian civilians, including 24 children, a woman and 5 journalists, were wounded. Eighteen of whom, including 3 children, were wounded in the Gaza Strip and the others were wounded in the West Bank. Concerning the nature of injuries, 58 civilians were hit with live bullets, 29 ones were hit with rubber bullets and 6 others were hit with tear gas canisters.

On Thursday dawn, 12 November 2015, Israeli forces committed a new cold-blooded crime by killing Abdullah Shalalda (28), from Sa’ir village, east of Hebron. This crime was committed at al-Ahli Hospital in Hebron by Israeli undercover agents ‘Mosta’rebeen’ that are well known for carrying out dozens of extra-judicial executions following al-Aqsa Intifada.

On the same day afternoon, Israeli forces wounded Mahmoud Wadi (17), from Sa’ir village while participating in a protest following the funeral procession of Abdullah Shalalda. The bullet entered the lower back and exited the right shoulder. The wounded civilian was taken to al-Ahli Hospital in Hebron, but at approximately 10:00 on Friday, 13 November 2015, medical sources declared that he succumbed to his injury.

During the reporting period, 75 Palestinian civilians in the West Bank, including 21 children a woman and 3 journalists, were wounded. Eight of them were wounded in East Jerusalem and its suburbs.

The Palestinian civilians wounded in the West Bank were as follows:

In peaceful protests against Israeli policies: 59 Palestinian civilians, including 19 children, a woman and 3 journalists, were wounded. Forty-one of them were hit with live bullets and 18 others were hit with rubber-coated metal bullets.

The Palestinian civilians wounded in the Gaza Strip were as follows:

Concerning targeting Palestinian fishermen in the Gaza Strip sea, on 13 November 2015, Israeli gunboats stationed off al-Waha resort, northwest of Beit Lahia, north of the Gaza Strip, opened fire at Palestinian fishing boats sailing with 2 nautical miles, but no casualties were reported. A similar shooting incident was reported on 17 November 2015, but no casualties were reported.

On 16 November 2015, Israeli gunboats opened fire at a Palestinian fishing boat on board of which were 2 fishermen. The boat was sailing 6.5 nautical miles off Gaza Seaport. As a result, they sustained minor wounds.

In the context of Israeli airstrikes, on 17 November 2015, Israeli warplanes raided a Palestinian training site, southwest of al-Bureij refugee camp, but no casualties were reported.

As part of the collective punishment policy practiced by Israeli forces against Palestinian civilians, following the approval of the Israeli High Court on Thursday, 12 November 2015, on the demolition of houses belonging to families of Palestinian civilians accused of ‘being involved in carrying out attacks against Israeli target’, Israeli forces started applying the decision. On 14 November 2015, Israeli forces moved into Nablus. They stationed around houses of 3 Palestinian civilians accused of being involved in ‘Itamar’ attack, on 01 October 2015, that resulted then in killing a settler and his wife. Explosive experts planted explosives in the walls of the 3 houses and bombed them. The bombed houses belong to Karam al-Masri, Samir Kousa and Yehya Hamad. The explosions inflicted damage on 8 houses and an orphanage.

On the same day, Israeli forces moved into Silwad village, northeast of Ramallah. They raided a house belonging to the family of Mo’az Hamed (26), a Palestinian prisoner detained at the Palestinian Preventive Security prison since last July under the pretext of being a member of a military cell that killed a settler in June. Israeli forces surrounded the area, where the explosive experts planted explosive inside the house and remotely bombed it. The house was completely destroyed as a result and other neighbouring houses sustained large damage.

On 16 November 2015, Israeli forces bombed an apartment rented by the family of Mohammed Shaheen, who was arrested by Israeli forces in June 2015 under the pretext of killing a settler.

In the same context, the Israeli Home Front Command issued a decision on 12 November 2015 to confiscate and demolish a house belonging to the family of Baha’ Elayan in al-Mukaber Mountain village, southeast of Jerusalem. It should be noted that Baha’ was killed by Israeli forces after carrying out a stabbing and shooting attack in an Israeli bus on 13 October 2015, in the said village.

During the reporting period, Israeli forces conducted at least 77 military incursions into Palestinian communities in the West Bank and 11 ones in occupied East Jerusalem. During these incursions, Israeli forces arrested at least 111 Palestinian civilians, including 38 children. Thirty-six of these civilians, including 22 children, were arrested in East Jerusalem.