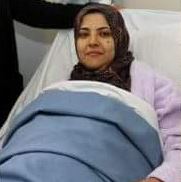 Israeli soldiers invaded, on Sunday at dawn, the Deheishe refugee camp, south of Bethlehem, and kidnapped a Palestinian woman, the wife of a political prisoner, who is serving several life terms.The soldiers invaded homes and searched them, before kidnapping Hanadi Mousa al-Moghrabi, 37. She is the wife of Ahmad al-Moghrabi, who was taken prisoner in 2002, and was sentenced to several life terms.

In addition, the soldiers summoned Ghassan Zawahra, 34, and two political prisoners identified as Nidal Abu Aker, 47, and Adnan al-Afandi, for interrogation in the Etzion military and security base.

It is worth mentioning that Zawahra is the brother of Mo’taz, who was critically shot in the chest, by the Israeli army fire, on October 13, 2015, and died shortly after he was moved to the hospital.

The invasion into the refugee camp led to clashes between the soldiers and local youths, who hurled stones and empty bottles on them, while the army fired rubber-coated steel bullets, gas bombs and concussion grenades; many Palestinians suffered the effects of tear gas inhalation.

The soldiers also invaded the Manger Square in Bethlehem, and clashed with local youths; no injuries were reported.