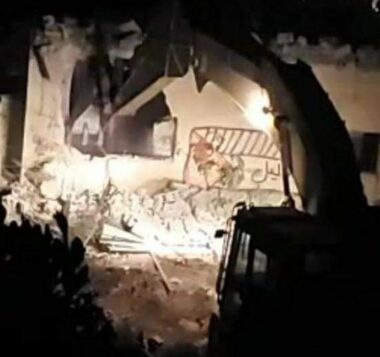 Israeli soldiers demolished, on Monday at dawn, the home of a Palestinian detainee, who stands accused of the killing of an Israeli man near Tel Aviv, two months ago.

They added that the demolition came shortly after the Israeli High Court of Justice denied an appeal filed by the family in October.

Mofeed Dweikat, the head of Rojeeb Village Council, said the soldiers demolished the two-story, 180 square/meter home, after forcing the family out.

He added that many Palestinians protested the invasion and the demolition, burnt tires, and hurled stones at the army, while the soldiers fired many live rounds, rubber-coated steel bullets, and gas bombs at them.

Local sources said the soldiers withdrew from the village after demolishing the Palestinian home.

Israel says that Khalil Dweikat, a Palestinian worker with a valid permit, is responsible for the stabbing death of Shai Ohayon, 39, a father of four, from Petah Tikva in central Israel.

According to Israeli sources, Dweikat, 46, was detained by police shortly after the stabbing, carrying a bloodstained knife, before he was handed to the Israeli Security Agency (Shin bet).

It is worth mentioning that Khalil Dweikat has a long history of mental disorders and received treatment by Palestinian physicians. He also was not a member or supporter of any Palestinian faction and had no political activities. He has not yet been convicted by an Israeli court.

Israel’s policy of home demolitions is an act of illegal collective punishment, targeting entire families, in direct violation of International law. Israel also does not demolish the homes of Israelis, especially colonialist settlers, who are responsible for killing or seriously wounding Palestinians in the occupied territories.