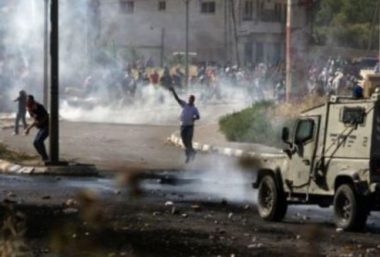 Mohammad Awad, a media activist in Beit Ummar, said the soldiers invaded the ath-Thaher area and the at-Tihta neighborhood, and conducted extensive military searches of homes, in addition to searching agricultural lands in Shu’ab as-Seer area, close to the illegal Karmie Tzur colony.

The soldiers also fired gas bombs and concussion grenades at Palestinians, who protested the invasion, causing many to suffer the effects of teargas inhalation.

The wounded Palestinians were moved to a local Children’s Emergency Center, and received the needed treatment.

It is worth mentioning that the soldiers also stopped and searched many Palestinian cars and interrogated drivers and passengers.

The army claimed that Palestinian protesters have frequently caused fire in lands in the colony, during numerous protests.