Army Kidnaps A Child In Jerusalem, Injures A Disabled Young Man In Hebron 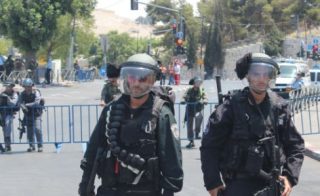 Israeli soldiers kidnapped, on Wednesday at night, a Palestinian child from Jerusalem’s Old City. The soldiers also shot and injured a disabled Palestinian man near Hebron, in the southern part of the occupied West Bank.

Eyewitnesses in occupied Jerusalem said the soldiers kidnapped a child, only 14 years of age, in the Old city, after attacking and beating her.

They added that the soldiers took the child to an interrogation center in the city, allegedly after “locating a knife in her purse.”

On Wednesday evening, the soldiers shot and injured a disabled young man, at the main entrance of Sa’ir town, east of Hebron city.

Palestinian security sources in Hebron said the soldiers shot Arif Sharif Abdul-Ghaffar Jaradat, 21, with a live round in his back. Jaradat was moved to a hospital in Hebron city, suffering a moderate injury.

It is worth mentioning that, on Wednesday at dawn, the soldiers invaded and searched a home in the at-Tour village, east of occupied Jerusalem, and kidnapped one Palestinian, identified as Ehab Abu al-Hawa, 21.

The soldiers also kidnapped at least twelve Palestinians, in various invasions and searches of homes, targeting different parts of the occupied West Bank.