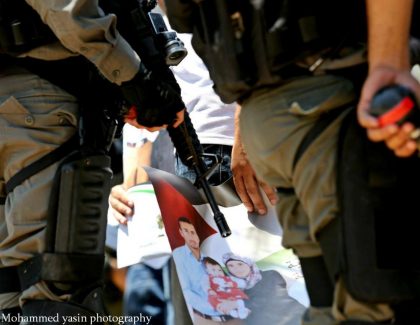 Israeli soldiers attacked, Friday, the weekly nonviolent protest against the Annexation Wall and colonies in Bil’in village, near the central West Bank city of Ramallah, and kidnapped a Palestinian teen and an Israeli solidarity activist. Lev was later released and placed under house arrest under very severe restrictions. She said the police broke into her apartment in Tel Aviv after destroying the locks with permission of the landlord.

Dozens of Palestinians, Israeli and international peace activists, including members of “Black Lives Matter” participated in the procession that started from the center of the village, heading towards the Palestinian orchards. Coordinator of the Popular Committee against the Wall and colonies, Abdullah Abu Rahma, called for massive participation in the Sunday evening protest, in Douma village, near the northern West Bank city of Nablus, to commemorate the death of the Dawabsha family, who were burnt to death last year, after Israeli terrorists firebombed their home as they slept.

The protesters carried posters of Sa’ad Dawabsha, his wife Reham and their child, Ali, 18 months, who were all killed in the terrorist attack, while the only survivor, Ahmad, 5, suffered severe burns. They called on the international community to act and bring the killers to justice.

They also commemorated the third anniversary of the death of Ahmad Husam Mousa, 10, who was shot dead by the Israeli army, and called for the release of hunger striking detainee, Bilal Kayed.